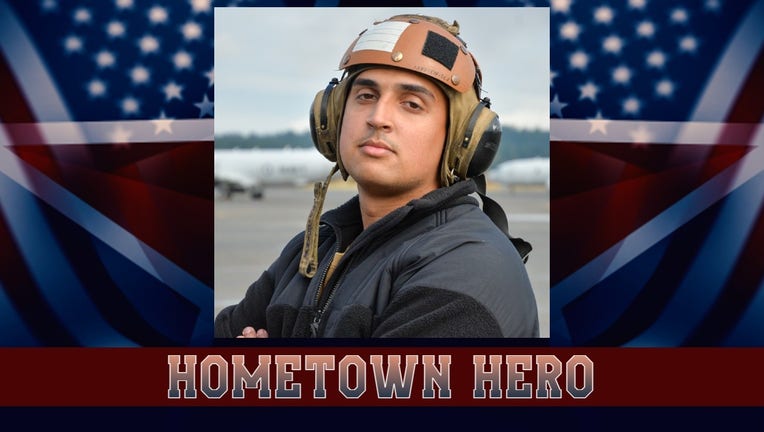 Lugo joined the Navy one year ago. Today, Lugo serves as an aviation ordnanceman.

"I wanted to travel and help others in need," said Lugo. "I believe the Navy has great opportunities to show what I can do and help people in need while learning important job skills."

"Don't wait until the last minute," said Lugo. "Don't drag your feet. Being in the Navy showed that I can do what's needed for promotion and other achievements."

These lessons have helped Lugo while serving in the Navy supporting the P-8 Poseidon mission.

The P-8 Poseidon mission is to conduct maritime patrol and reconnaissance as well as long-range anti-submarine warfare, anti-surface warfare, and intelligence gathering missions. They deploy around the globe to monitor the world’s oceans wherever they are needed.

The P-8A Poseidon, the Navy’s newest maritime, patrol, and reconnaissance aircraft, is a replacement aircraft for the legacy P-3C "Orion". According to Navy officials, leveraging the experience and technology of the successful P-3C "Orion" with the needs of the fleet, the P-8A is designed to be combat-capable, and to improve an operator’s ability to efficiently conduct anti-submarine warfare; anti-surface warfare; and intelligence, surveillance and reconnaissance missions.

Serving in the Navy means Lugo is part of a world that is taking on new importance in America’s focus on rebuilding military readiness, strengthening alliances, and reforming business practices in support of the National Defense Strategy.

"The more we train the better prepared we are to meet the tasks assigned," said Lugo.

With more than 90 percent of all trade traveling by sea, and 95 percent of the world’s international phone and internet traffic carried through fiber optic cables lying on the ocean floor, Navy officials continue to emphasize that the prosperity and security of the United States is directly linked to a strong and ready Navy.

According to Chief of Naval Operations Adm. Mike Gilday, four priorities will focus efforts on sailors, readiness, capabilities, and capacity.

"For 245 years, in both calm and rough waters, our Navy has stood the watch to protect the homeland, preserve freedom of the seas, and defend our way of life," said Gilday. "The decisions and investments we make this decade will set the maritime balance of power for the rest of this century. We can accept nothing less than success."

Lugo and other sailors have many opportunities to achieve accomplishments during their military service.

"I'm proud of earning my qualifications," said Lugo "This required a lot of studying and practice to learn how each machine worked."

As Lugo and other sailors continue to train and perform the missions to support national defense, they take pride in serving their country in the United States Navy.

"Serving in the Navy is a great opportunity to learn about different career fields," added Lugo. "The Navy does a great job matching your skill sets with what the Navy needs to complete the mission."