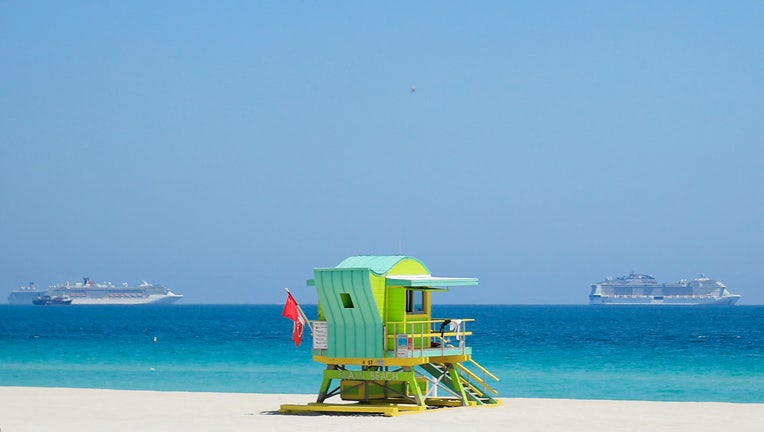 Several cruise ships including the Costa Favolosa and Magica are seen off the coast on March 26, 2020 in Miami Beach, Florida. (Photo by Cliff Hawkins/Getty Images)

MIAMI - Miami-Dade County beaches that have been closed because of the coronavirus pandemic are set to reopen more than a week after their previous reopening date was pushed back by protests against police brutality.

Miami-Dade County Mayor Carlos Gimenez announced Monday that he was lifting a countywide curfew immediately and that beaches would be allowed to open on Wednesday. Visitors will be required to follow new social distancing guidelines to help prevent the spread of COVID-19.

The beaches had been set to reopen June 1 in line with a statewide plan to restart the economy. After a May 30 protest related to the Minneapolis police custody death of George Floyd led to downtown Miami stores being looted and police cars being destroyed, Gimenez instituted a curfew and said he wouldn't reopen beaches until it was lifted.

Miami-Dade County was the area of Florida hit hardest by coronavirus, with nearly 20,000 cases and 767 deaths. As of Monday, Florida had nearly 65,000 total cases and 2,712 reported deaths.