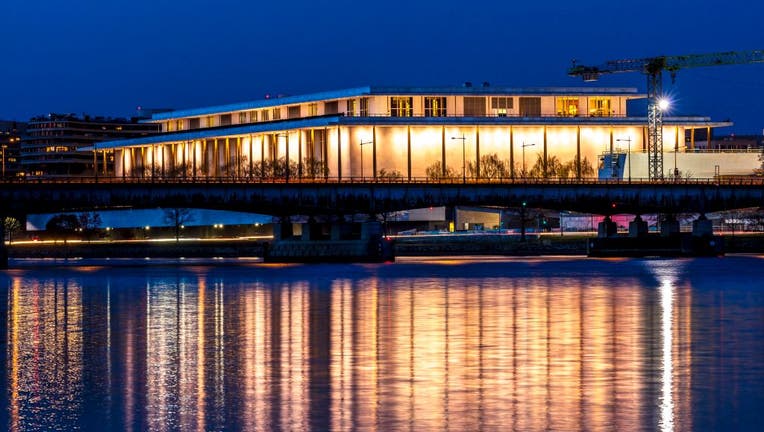 WASHINGTON (FOX 5 DC) - The John F. Kennedy Center for the Performing Arts will be completely dimmed for nine nights in honor of the final nine minutes of George Floyd's life.

Widely seen cellphone video showed that a white officer, Derek Chauvin, pressed his knee into Floyd’s neck for several minutes while Floyd, who was handcuffed, pleaded for air and eventually stopped moving.

Chauvin now faces murder and manslaughter charges. The three other officers who took part in the arrest were fired but haven't been charged.

Floyd’s death sparked national and international outrage, setting off protests across major cities in the U.S. and even inspiring marches in the United Kingdom, Germany and other countries.

"Dimming the lights is a symbol. It is not the solution," the organization said in a thread of tweets outlining how they will make an effort to "reflect the entire nation through the performing arts and within our organization."

The organization also pleded to do more to highlight Black stories through art.

"We pledge that more of them will be heard on the stages of the nation’s cultural center, as we continue in our ongoing effort to reflect the entire nation through the performing arts and within our organization."

8:08 p.m. – A clerk at Cup Foods called 911 to report that a man bought merchandise at the store using a counterfeit $20 bill. Officers Thomas Lane and J. Alexander Kueng arrive at the store and locate Floyd in a nearby vehicle with two other people.

As he is speaking with Floyd, Lane pulls his gun out, points it at Floyd through Floyd’s open window and orders him to show his hands. When Floyd puts his hands on the steering wheel, Lane puts his gun back in the holster.

The officers eventually order Floyd him of the vehicle and handcuff him, despite some resistance.  After being handcuffed, Floyd becomes compliant. The officers sit him down on the sidewalk and talk with him for two minutes, during which they ask if he is “on anything” and explain that he is being arrested.

8:14 p.m. – Kueng and Lane attempt to walk Floyd to their squad car, but Floyd stiffened up, fell to the ground and told the officers he was claustrophobic. Chauvin and Thoa arrive in a separate squad car.

8:19 p.m. – Chauvin pulls Floyd out of the squad car. Floyd goes to the ground face down and still handcuffed. Kueng holds his back and Lane holds his legs. Chauvin presses his knee onto Floyds neck. Floyd repeats, “I can’t breathe.”

At one point, Lane asks, “Should we roll him on his side?” and Chauvin says no. Lane says he is worried about “excited delirium” Chauvin responds, “that’s why we have him on his stomach." None of the three officers moved from their positions.

8:25 p.m. – Body camera video appears to show Floyd ceasing to breathe or speak. Kueng checked Floyd’s pulse and says he cannot find one. None of the officers moved from their positions.

8:27 p.m. – Chauvin removes his knee from Floyd’s neck. An ambulance and paramedics arrives and the officers place Floyd on a gurney.

9:25 p.m. – Floyd was pronounced dead at the Hennepin County Medical Center, according to the medical examiner’s report.