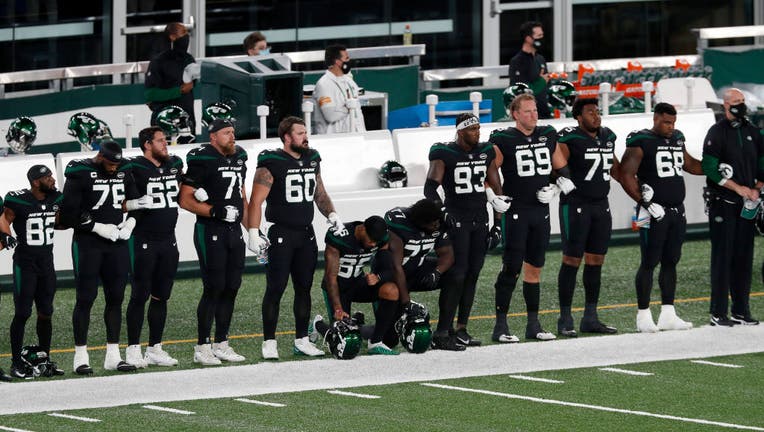 EAST RUTHERFORD, NEW JERSEY - OCTOBER 01: (NEW YORK DAILIES OUT) Lawrence Cager #86 and Mekhi Becton #77 of the New York Jets kneel during the national anthem before a game against the Denver Broncos at MetLife Stadium on October 01, 2020 in East Rut

NEW YORK - All New York Jets players and coaches have tested negative for COVID-19, and Sunday's game against Arizona will be played on time.

The Jets posted a statement on social media Friday night, hours after their training facility was closed due to a presumptive positive coronavirus test for one player.

“This evening, we received negative PCR COVID-19 test results for all players, coaches and personnel,” the team said. "Following a presumptive positive COVID-19 test and out of an abundance of caution to ensure everyone’s health and safety, we sent all players and personnel home this morning. We also initiated all NFL mandated protocols including player isolation, subsequent testing, and contact tracing.

“As we have thus far, we will continue to follow required health and safety protocols in the best interests of our coaches, players, staff and community. We look forward to our game this Sunday against the Arizona Cardinals.”

During the summer, Lions quarterback Matthew Stafford had a similar false positive.

The league has had 60 cases since testing began in which one player or staff member tested positive and there wasn’t further transmission among the team. By sending everyone home from the facility Friday morning, the Jets took the appropriate steps under the NFL/NFLPA COVID-19 protocols. And then the 100% negative tests were announced in the evening.

The Tennessee Titans got some good news Friday with no positive test results hours after the NFL rescheduled their game with Buffalo to Tuesday night, a person familiar with that situation told The Associated Press.

The Titans' outbreak increased to 23 on Thursday with 21 positive results returned since Sept. 29. Now the Titans have gone three of the past five days without a positive test after the latest results, according to the person who spoke to the AP on condition of anonymity because neither the NFL nor the Titans announced the latest results.

The NFL announced Thursday night that the Titans (3-0) will host Buffalo (4-0) on Tuesday. The league already postponed, then rescheduled the Titans’ game with Pittsburgh from Oct. 4 to Oct. 25 during the outbreak.

The Bills had been preparing and practicing all week for a Sunday game in Nashville. With the NFL rescheduling their game with Tennessee, the Bills announced they will not practice or have any availability Friday.

The league also rescheduled New England’s game with Denver from Sunday to Monday.

“These scheduling decisions were made to ensure the health and safety of players, coaches and game day personnel and in consultation with medical experts,” the NFL said in a statement Thursday night.

Five games now have been rescheduled because of the pandemic: Pittsburgh at Tennessee in Week 3 was moved to Oct. 25 with Pittsburgh-Baltimore also switched from Oct. 25 to Nov. 1. The Patriots now will play on Monday night for a second straight week after their game in Kansas City was postponed a day.

If the Titans' testing allows Tennessee to host Buffalo on Tuesday, the Bills' prime-time game against Kansas City in Buffalo will be moved from Thursday to the weekend. That would be the sixth NFL game to be rescheduled — all this month.

The Patriots worked remotely again Friday after reigning NFL Defensive Player of the year Stephon Gilmore joined quarterback Cam Newton on the reserve/COVID-19 list Wednesday. New England also has a defensive tackle from the practice squad on the list in the league’s other mini-outbreak.

The NFL told the Titans to close their facility on Sept. 29, and their last game was a 31-30 win over Minnesota on Sept. 27.

NFL Commissioner Roger Goodell warned all 32 teams Monday that following league protocols is mandatory and that violations forcing changes in the schedule could lead to being stripped of draft choices or even forfeiting games. The NFL also updated protocols on Oct. 2.

The Titans’ outbreak increased to 23 Thursday with tight end MyCole Pruitt and a defensive back from the practice squad put on the reserve/COVID-19 list Thursday afternoon. The Titans’ facility remains closed with the team still prohibited from any in-person activities.

Tennessee currently has 13 players on the reserve/COVID-19 list, including four starters and a long snapper.

In a memo to the 32 teams obtained by The Associated Press, the NFL's officiating office reminded “all individuals must keep their masks in place when interacting with game officials on the field."

“We have seen multiple occasions where head coaches have removed their masks to communicate with game officials during games,” the memo from league executive Perry Fewell said. “Doing so creates unnecessary, increased risk for the game official, the head coach, and others, and is inconsistent with the requirement that face coverings be worn at all times.”

“Failure to adhere to the NFL-NFLPA COVID-19 related protocols will result in accountability measures being imposed against offending individuals and/or clubs, including fines, suspensions of persons involved, and/or the forfeiture of a draft choice(s),” the memo said. “Additionally, we have reminded game officials that if an individual not wearing a face covering approaches them inappropriately, they have the authority to take administrative or officiating action, including a 15-yard penalty for unsportsmanlike conduct.”

The NFL Referees Association had complained to the league about coaches approaching them without masks properly in place.