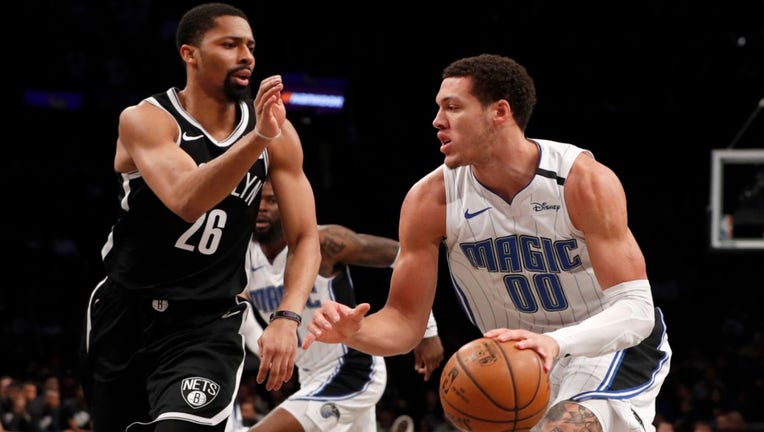 Aaron Gordon #00 of the Orlando Magic drives against Spencer Dinwiddie #26 of the Brooklyn Nets at Barclays Center on February 24, 2020 in New York City. (Photo by Jim McIsaac/Getty Images)

LAKE BUENA VISTA, Fla. - The National Basketball Association released its schedule for the restart of the 2019-20 regular season.

The Orlando Magic will play the first of their eight “seeding games” on Friday, July 31 against the Brooklyn Nets at the Field House at ESPN Wide World of Sports Complex. Game time is 2:30 p.m.  (View Full Magic Schedule Here)

New Orleans will be in the first game of the resumed NBA season on July 30, taking on Utah at the Disney World complex in the opener of a doubleheader. And just as the initial first night of this season-like-none-other did, the second game of nationally televised twinbill will pit the Los Angeles Lakers against the Los Angeles Clippers.

The Jazz were a logical storyline for the first game back, after Utah’s All-Star center Rudy Gobert was the first player in the league to test positive for the coronavirus — a development that forced the league to suspend the season on March 11. More than four and a half months will have passed between game nights in the NBA, but the league officially completed talks Friday with the National Basketball Players Association on the terms for restarting the season and therefore could release the 88-game slate of what are being called seeding games.

Finally, play will resume in a season that started with political strife between the NBA and China in October, the deaths of David Stern and Kobe Bryant in January, a pandemic breaking out in March and racial issues surrounding police brutality and other forms of inequality dividing the country once again during much of the league’s shutdown.

“There’s no question this season and frankly this year has been one which none of us will soon forget,” NBPA executive director Michele Roberts said. “Obviously, the virus came at us hard without any prior warning and then we were faced with the prospect of losing the season.”

But with a plan for strict medical protocols agreed upon, the league and its players believe it is safe to resume.

Players will start arriving at the Disney complex on July 7, will be tested daily once they get there, and could be away from their families for more than three months. Families aren’t expected to be permitted on-site at Disney until the start of the second round of the playoffs, set to begin in late August or early September.

“Everyone is making some type of sacrifice,” Miami Heat forward Andre Iguodala said. “A lot of people in America don’t have jobs right now, and we have the opportunity to be a beacon of light, not just for that one particular thing but the social injustices. We’re going to shed light on that, people being away from their families, understanding that sacrifice ... the greater good of everything that our players stand for, including the game of basketball.”

Orlando Magic packing for Disney and cautious of COVID-19

The Orlando Magic will soon play ball at Walt Disney World. The team is forced to take extreme safety measures to prevent spread or exposure to the coronavirus.

For the 22 teams going to Disney, the setup of the eight-game slates will be largely the same — one back-to-back for each of the clubs, with all the games set to be played in a 16-day span ending Aug. 14. The NBA will be using three arenas at Disney, and other than the two-game slate on the opening night there will be somewhere between four and seven games played each day.

There will be some very unusual elements, with games starting as early as 1 p.m. on weekdays, 12:30 p.m. on weekends and most nights seeing the slate end with 9 p.m. tip-offs — other than NBA Finals games, an absolute rarity for games being played on the East coast.

Plans call for 52 of the 88 seeding games to be nationally televised, with 18 on TNT (including the opening-night doubleheader), 17 on ESPN, 14 on NBA TV and three on ABC. Games will be shown in local markets as well.

Most of the arenas on the ESPN Wide World of Sports campus will be used for multiple games each day, with no tip-off scheduled for less than four hours apart in each of those three buildings — with the league allowing time in between games for sanitizing of everything that players, coaches or staff could come into contact with.

If a play-in tournament for the No. 8 seed in either conference is needed by the ninth-place team finishing within four games of the team in eighth, those games in a best-of-two series that the No. 9 team would need to sweep will begin on Aug. 15.