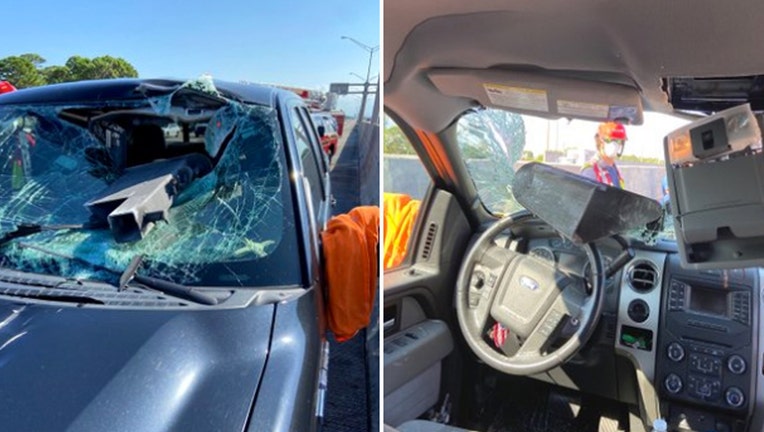 A Florida driver "escaped serious harm" after a hunk of metal crashed through his windshield on Tuesday, according to authorities.

Eduardo Medina, 64, was driving on I-95, near Delray Beach, when the incident occurred, fire officials said.

According to the Florida Highway Patrol, the metal fell off a flatbed tow truck that was driving on Medina's right side around 3:30 pm. Medina hit the brakes and stopped in the middle of the interstate as the truck continued forward.

Medina said some of the shattered glass fell on him after the metal pierced through above his steering wheel, according to West Palm Beach's WPEC.

Pictures were taken by Delray Beach Fire Rescue after the incident, which showed the large piece of metal above the wheel, located near where his head could have been.

"Thank God I am OK," Medina said, according to the station.

His wife, Norma Rodriguez, and four children believe he was saved by a higher power.

"We just believe that God saved his life, and his Guardian Angel as well," said Rodriguez, according to the station.

Fire officials added that Medina had just minor injuries from the shattered glass.