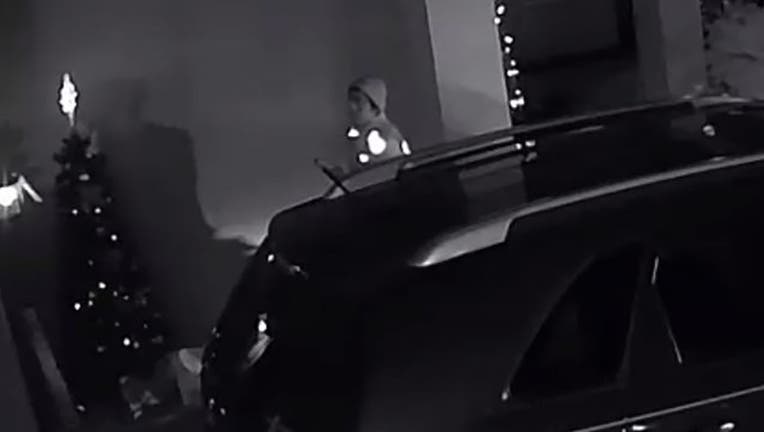 The delivery man took a photo of the package before picking it back up and walking away with it. (Polk County Sheriff’s Office)

FOX NEWS - Deputies in Florida are searching for a deliveryman who was spotted on a home security camera dropping off a package and snapping a photo to confirm its arrival before stealing the parcel back.

The unidentified driver delivered the package on Thursday to a home in Davenport, located about 35 miles south of Orlando, the Polk County Sheriff’s Office wrote on Facebook.

In video footage, the man is seen carrying a package to the front door and setting it down. He takes a picture of the package with a cellphone – which the sheriff’s office says was sent to the recipient to confirm its delivery – before picking the box up and leaving with it.

The deliveryman works for a third-party service, which has made it more difficult for deputies to track him down before Christmas, the sheriff’s office said.

“As you can imagine, a lot of Christmas gifts are being delivered and this is likely not going to be the only gift that doesn’t make it under someone’s tree,” the sheriff’s office said.

With the holiday season reaching its peak, reports of porch pirates have soared, with many thieves getting creative in the art of the steal.

Last week, police in Oklahoma were looking for a costumed woman spotted on a home security camera pinching a package from a porch. The woman appeared to be wearing a bandana-type mask and a holster on each hip.

Another porch pirate in Washington state disguised herself as a delivery driver wearing an Amazon vest. The King’s County Sheriff’s Office last week shared video of the thief leaving behind a fake package while stealing those already delivered.