The FDA has authorized the marketing of products through the MRTP pathway for eight Swedish Match USA, Inc. snus smokeless tobacco pouches sold under the “General” brand name, according to the release.

The pouches of ground tobacco, called snus — Swedish for snuff and pronounced "snoose" — have been popular in Scandinavian countries for decades but are a tiny part of the U.S. tobacco market.

Previously, in response to filings of premarket tobacco applications (PMTAs), these products were authorized for sale in the U.S. without the modified risk claims by the FDA in 2015, the release said. 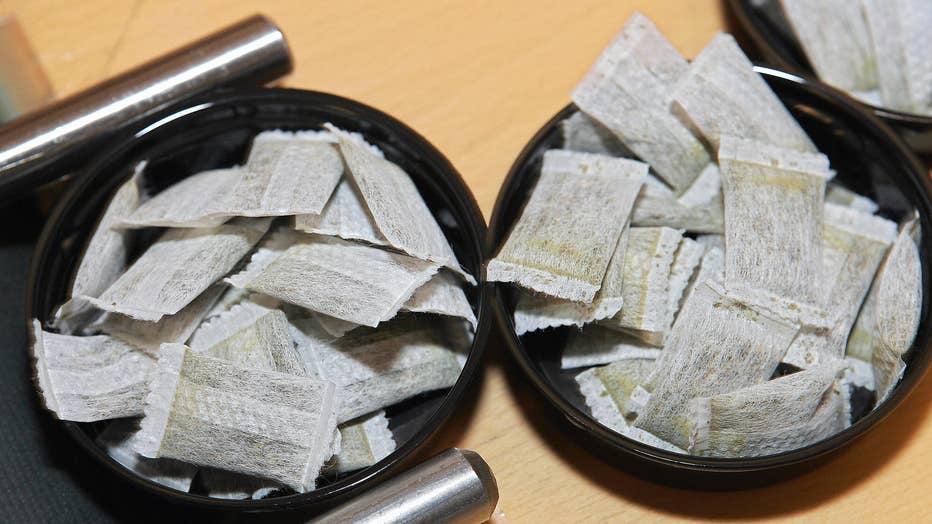 FILE: Bags of nicoten-free "snus" or snuff at the production line in a file photo from August 18, 2004 in Trangsviken, which is north of Stockholm. Building on the centuries-old tradition of "snus", a Scandinavian form of moist snuff is used by more

Tuesday’s action authorizes the manufacturer to market the products with the specific claim: “Using General Snus instead of cigarettes puts you at a lower risk of mouth cancer, heart disease, lung cancer, stroke, emphysema, and chronic bronchitis.”

Users stick the teabag-like pouches between their cheek and gum to absorb nicotine. Unlike regular chewing tobacco, the liquid from snus is generally swallowed, rather than spit out. Chewing tobacco is fermented; snus goes through a steamed pasteurization process.

The FDA said it granted the authorization after reviewing scientific evidence submitted by the company that supports the claim.

“Today’s action demonstrates the viability of the pathway for companies to market specific tobacco products as less harmful to consumers, but only following a thorough scientific evaluation by the FDA. Our team of scientific experts examined these applications to ensure that the tobacco products meet the public health standards in the law, said Ned Sharpless, acting FDA commissioner.

Essentially, the U.S. health regulators have judged the specific type of smokeless tobacco to be less harmful than cigarettes, a decision that could open the door to other less risky options for smokers.

Although Tuesday’s decision permitted the eight “General” brand snus smokeless tobacco products to be sold in the U.S. with a modified risk claim, it does not mean these products are safe or “FDA approved,” the agency said.

Sharpless said while the FDA is authorizing the specific modified risk tobacco products, it’s still “important for the public to understand that all tobacco products — including these — pose risk.”

In addition, the pouches’ packaging and advertising must still also bear mandated government warning statements that they can cause mouth cancer, gum disease and tooth loss. The warnings have been required for all smokeless tobacco products since July 22, 2010.

The modified risk orders granted Tuesday are product-specific and limited to five years, according to the FDA.

In an effort to help prevent youth access and exposure, the agency has also placed stringent advertising and promotion restrictions on the products, including a requirement to restrict advertising to adults, the release said.

“In addition to stringent restrictions to limit youth access and exposure to advertising, this time-limited authorization comes with a number of postmarket requirements that will allow us to keep a close watch on the marketplace. Should any information lead us to determine that the marketing of these products as posing less risk no longer benefits the health of the population as a whole, the agency would consider withdrawing this authorization,” Sharpless said.

He said the agency based its decision on long-term, population-level data showing lower levels of lung cancer, emphysema and other smoking-related disease with the use of snus.

Stockholm-based Swedish Match sells its snus under the brand name General in mint, wintergreen and other flavors. They compete against pouches from rivals Altria and R.J. Reynolds. But pouches account for just 5 percent of the $9.1 billion-dollar U.S. market for chew and other smokeless tobacco products, according to Euromonitor market research firm.

And public health experts questioned whether U.S. smokers would be willing to switch to the niche product.

"Snus products have a bit of a challenge" among smokers who are used to inhaling their nicotine, said Vaughan Rees, director of Harvard University's Center for Global Tobacco Control.

The U.S. smoking rate has fallen to an all-time low of 14 percent of adults, or roughly 34 million Americans. But smoking remains the leading cause of preventable disease and death in the U.S., responsible for some 480,000 deaths annually.

The FDA's decision has been closely watched by both public health experts and tobacco companies.

Public health experts have long hoped that alternatives like the pouches could benefit Americans who are unable or unwilling to quit cigarettes and other traditional tobacco products. Tobacco companies are looking for new products to sell as they face declining cigarette demand due to tax increases, health concerns, smoking bans and social stigma.

The FDA itself also has much at stake in the review of snus and similar tobacco alternatives.

Congress gave the FDA the power to regulate key aspects of the tobacco industry in 2009, including designating new tobacco products as "modified risk," compared with traditional cigarettes, chew and other products.

But until Tuesday, the FDA had never granted permission for any company to make such claims for its products.

The FDA is reviewing several other products vying for "reduced risk" status, including a heat-not-burn cigarette alternative made by Philip Morris International. While electronic cigarettes are generally considered less harmful than the tobacco-and-paper variety, they have not been scientifically reviewed as posing a lower risk.