An image provided by the Department of Justice shows partially redacted documents with classified markings, including colored cover sheets indicating their status, that FBI agents reported finding at Trump's office in Mar-a-Lago.

WASHINGTON - The Justice Department said Tuesday that classified documents were "likely concealed and removed" from former President Donald Trump’s Mar-a-Lago estate as part of an effort to obstruct the federal investigation into the discovery of the government records.

The FBI also seized 33 boxes containing more than 100 classified records during its Aug. 8 search of Mar-a-Lago and found classified documents stashed in Trump's office, according to a filing that lays out the most detailed chronology to date of months of strained interactions between Justice Department officials and Trump representatives over the discovery of government secrets.

The filing offers yet another indication of the sheer volume of classified records retrieved from Mar-a-Lago. It shows how investigators conducting a criminal probe have focused not just on why the records were improperly stored there, but also on the question of whether the Trump team intentionally misled them about the continued, and unlawful, presence of the top secret documents.

The timeline laid out by the Justice Department made clear that the extraordinary search of Mar-a-Lago came only after other efforts to retrieve the records had failed, and that it resulted from law enforcement suspicion that additional documents remained inside the property despite assurances by Trump representatives that a "diligent search" had accounted for all of the material.

It also included a picture of some of the seized documents bearing clear classification markings, perhaps as a way to rebut suggestions that whoever packed them or was handling them could have easily failed to appreciate their sensitive nature. 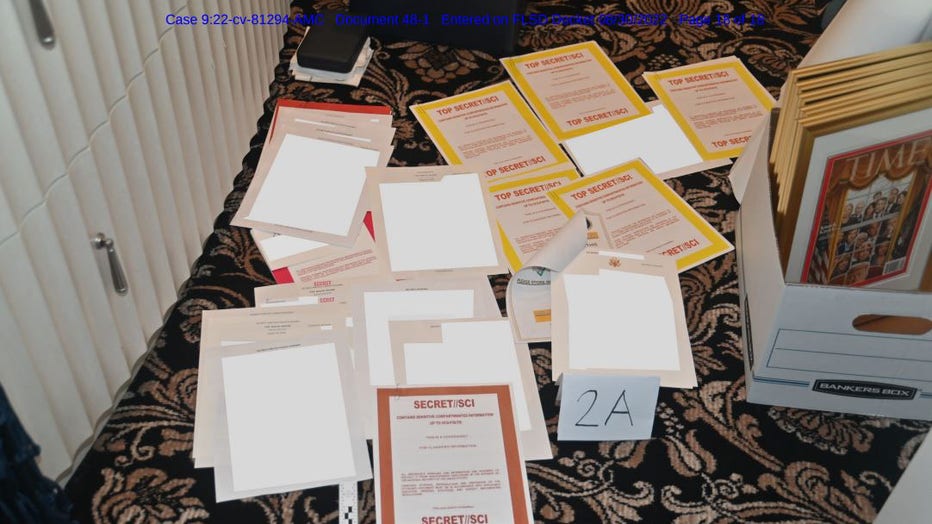 The photo shows the cover pages of a smattering of paperclip-bound classified documents — some marked as "TOP SECRET//SCI" with bright yellow borders, and one marked as "SECRET//SCI" with a rust-colored border — along with whited-out pages, splayed out on a carpet at Mar-a-Lago. Beside them sits a cardboard box filled with gold-framed pictures, including a Time magazine cover.

Though it contains significant new details on the investigation, the Justice Department filing does not resolve a core question that has driven public fascination with the investigation — why Trump held onto the documents after he left the White House and why he and his team resisted repeated efforts to give them back. In fact, it suggests officials may not have received an answer.

During a June 3 visit to Mar-a-Lago by FBI and Justice Department officials, the document states, "Counsel for the former President offered no explanation as to why boxes of government records, including 38 documents with classification markings, remained at the Premises nearly five months after the production of the Fifteen Boxes and nearly one-and-a-half years after the end of the Administration."

That visit to Mar-a-Lago, which came weeks after the Justice Department issued a subpoena for the records, receives substantial attention in the document and appears to be a key investigative focus.

Though Trump has said he had declassified all of the documents at Mar-a-Lago, his lawyers did not suggest that during the visit and instead "handled them in a manner that suggested counsel believed that the documents were classified," according to the document.

The Department of Justice has unsealed the Donald Trump search warrant affidavit that gave the FBI probable cause to look for classified documents at Mar-a-Lago in Palm Beach, Florida. The document, which says government is conducting a criminal investigation concerning the improper removal of classified information, contains heavy redactions on the probable cause that lead investigators to believe the classified documents were in Trump's possession.

FBI agents who went there to receive additional materials were given "a single Redweld envelope, double-wrapped in tape, containing the documents," the filing states.

That envelope, according to the FBI, contained 38 unique documents with classification markings, including five documents marked confidential, 16 marked secret and 17 marked top secret.

During that visit, the document says, Trump’s lawyers told investigators that all the records that had come from the White House were stored in one location — a Mar-a-Lago storage room — and that "there were no other records stored in any private office space or other location at the Premises and that all available boxes were searched."

After that, though, the Justice Department, which had subpoenaed video footage for the property, "developed evidence that government records were likely concealed and removed from the Storage Room and that efforts were likely taken to obstruct the government’s investigation." The filing does not identify the individuals who may have relocated the boxes.

"That the FBI, in a matter of hours, recovered twice as many documents with classification markings as the ‘diligent search’ that the former President’s counsel and other representatives had weeks to perform calls into serious question the representations made in the June 3 certification and casts doubt on the extent of cooperation in this matter," the document states.

It says, "In some instances, even the FBI counterintelligence personnel and DOJ attorneys conducting the review required additional clearances before they were permitted to review certain documents."

The Department of Justice (DOJ) filed its response opposing the appointment of a "special master" to review documents seized from former President Donald Trump's Mar-a-Lago estate.

The investigation began from a referral from the National Archives and Records Administration, which recovered 15 boxes from Mar-a-Lago in January that were found to contain 184 documents with classified markings, including top secret information.

The purpose of the Tuesday night filing was to oppose a request from the Trump legal team for a special master to review the documents seized during this month's search and set aside those protected by claims of legal privilege. U.S. District Judge Aileen Cannon is set to hear arguments on the matter on Thursday.

Cannon on Saturday said it was her "preliminary intent" to appoint such a person but also gave the Justice Department an opportunity to respond.

On Monday, the department said it had already completed its review of potentially privileged documents and identified a "limited set of materials that potentially contain attorney-client privileged information." It said Tuesday that a special master was therefore "unnecessary."

In a separate development, the Trump legal team has grown with the addition of another attorney. Chris Kise, Florida's former solicitor general, has joined the team of lawyers representing Trump, according to two people familiar with the matter who were not authorized to discuss the move by name and spoke on condition of anonymity. Kise did not return messages seeking comment.