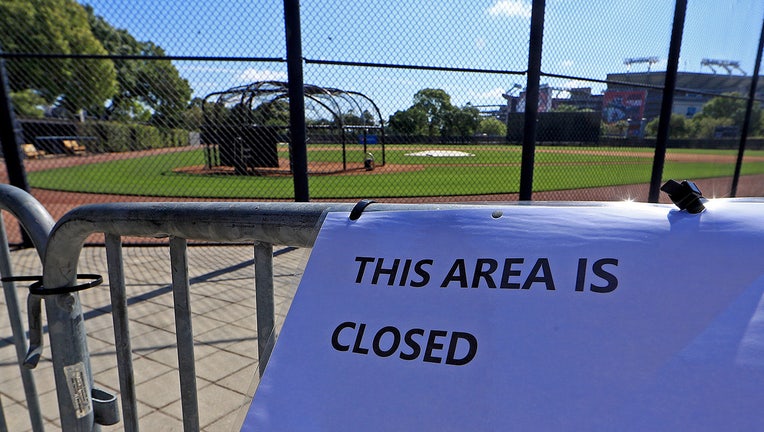 A view of the New York Yankees Spring Training facility at George M. Steinbrenner Field which has been closed due to the coronavirus outbreak on March 18, 2020 in Tampa, Florida. (Photo by Mike Ehrmann/Getty Images)

TALLAHASSEE, Fla. - Gov. Ron DeSantis on Tuesday defended declaring professional wrestling an essential service and raised the possibility of holding other televised sporting events in empty venues as people shelter at home amid the coronavirus pandemic.

DeSantis said people are “starved” for new entertainment, a day after it was reported he gave the green light to the wrestling giant WWE as an essential business to tape events in Orlando.

“I think if NASCAR does a race and can televise it without having a large crowd, I think that’s a good thing,” DeSantis told reporters at the Capitol.

“People are chomping at the bit,” he added. “If you think about it, we have never had a period like this in modern American history where you’ve had so little new content, particularly in the sporting realm. I mean, we are watching reruns from like the early 2000s.”

“You wouldn’t have a gallery there. You wouldn’t have the crowds,” DeSantis said. “Put that on TV. People are starved for content. We haven’t had a lot of new content since the beginning of March.”

Masks, distancing could be yearlong effort

Florida's surgeon general is painting a vivid picture of life after COVID-19. He says we need to continue social distancing until we have a vaccine, but that could take more than a year.

The question arose as a WWE staff member tested positive for the coronavirus.

Demings said that “if one of my family members tested positive in my house, that would be concerning to me.”

Demings added that provisions would be made to ensure other people weren’t infected.

The WWE, calling itself a “diversion from these hard times,” said in a news release that the employee had no contact with others after the diagnosis and has made a complete recovery.

"We believe this matter is low risk to WWE talent and staff, as the individual and a roommate became symptomatic in the days following exposure to two people working in acute health care on the evening of March 26, after WWE's TV production on a closed set was already complete," the WWE statement said.

DeSantis said the state hasn’t received a “huge amount” of requests from businesses to be declared essential, but noted Disney requested a declaration for some of its gardeners, which he approved.

Ever since Pinellas County shut down its beaches, the popular gathering areas have been eerily empty. SkyFOX Drone gives a view of the beaches from St. Pete Beach to Clearwater Beach.

Beshears, whose department oversees licensing for boxing, kick boxing and mixed martial arts, tweeted to UFC President Dana White that the department can work to bring the events to Florida.

“Why go to an island? Florida is your huckleberry. @FloridaDBPR will get your fighters licensed and we will make it work,” Beshears tweeted. “Then remember us when all the cool kids want to date you again, that Florida tried to help out when nobody else would.”

RELATED: Players, coaches ready to get back in the game -- once it's safe

Meanwhile, USA Today has reported that among ideas being considered by Major League Baseball is to undertake an abbreviated 2020 season with teams playing games at spring-training locations in Arizona and Florida.

The 15 teams that train in Florida would play, without fans in attendance, under revised divisional alignments based on the geography of training camps.

“We are appreciative that the governor is open to playing games in Florida as one potential solution, but we all agree that such efforts can only be undertaken in a manner that does not endanger public health, nor the health of our players and fans,” Courtney wrote in an email to the governor's office.