As California Democratic Gov. Gavin Newsom heads to Washington this week, speculation about his national political ambitions won’t be far behind. The three-day swing, anchored to an award Newsom will receive on behalf of his home state from an education group, will provide the Democratic governor with a national stage to continue his outspoken defense of abortion rights and gun restrictions.

DES MOINES, Iowa (AP) - Democrats are poised to strip Iowa of its traditional lead-off spot in the presidential nominating calendar in 2024, part of a broader effort to better reflect the party’s deeply diverse electorate by allowing less overwhelmingly white states to vote first.

The Democratic National Committee's rule-making arm had planned to recommend on Friday which states should be the first four to vote, while considering adding a fifth before Super Tuesday, when a large number of states hold primary elections. But it delayed the decision until after November's election, lest it become a distraction affecting Democrats in key congressional races.

Still, the position of Iowa's caucus remains precarious after technical glitches sparked a 2020 meltdown. More than a decade of complaints that caucus rules requiring in-person attendance serve to limit participation are reaching crescendo. That's ignited a furious push for the No. 1 position between New Hampshire, which now goes second but traditionally kicks off primary voting, and Nevada, a heavily Hispanic state looking to jump from third to first.

"I fully expect that Iowa will be replaced," said Julián Castro, a former San Antonio mayor and federal housing chief. "And that the primary calendar will be reordered to better reflect the diversity of the Democratic Party and of the country."

Castro isn't on the rules committee but has criticized Iowa being first since his 2019 presidential run. A Democratic National Committee spokesperson said the rules committee "is conducting a thorough process" and will continue to "let it play out."

Iowa has survived previous challenges and may do so again, especially given that the final decision won't come for months. It argues that, aside from 2020, voters here have a strong track record launching the nomination process — and that its caucuses keep Democrats relevant amid the state's recent shift to the right.

"When I became chair and we started this process, the word was ‘Iowa’s done,’" Wilburn told reporters Thursday. "But no decision has been made. No calendar has been presented to the committee. We are still in this fight."

But many rules committee members privately said that the party is leaning toward either New Hampshire or Nevada going first, or perhaps on the same day. They all requested anonymity to more freely detail discussions that remain ongoing.

South Carolina, with its large bloc of Black Democrats, may move from fourth to third, freeing up a large Midwestern state to go next. Michigan and Minnesota are making strong cases, but both can’t move their primary dates without legislative approval, requiring support from Republicans.

If the committee adds a fifth early slot, that could go to Iowa to soften the blow.

Iowa has kicked off voting since 1976, when Jimmy Carter scored a caucus upset and grabbed enough momentum to eventually win the presidency. Since then, it's been followed by New Hampshire, which has held the nation’s first primary since 1920. Nevada and South Carolina have gone next since the 2008 presidential election, when Democrats last did a major primary calendar overhaul.

Nevada has now scrapped its caucus in favor of a primary. During a recent presentation before rules committee members, its delegation showed a video arguing that "tradition is not a good enough reason to preserve the status quo."

"If a diverse and inclusive state isn’t at the front of the primary calendar, I’m really concerned that what we’re gonna keep seeing is the same criticisms that we’ve been seeing about the Democratic Party primary process," said Nevada Democratic Sen. Jacky Rosen.

Representatives from Iowa and New Hampshire argue that small states let all candidates — not just well-funded ones — connect personally with voters, and that losing their slots could advantage Republicans in congressional races. The GOP has already decided to keep Iowa starting its 2024 presidential nominating cycle.

"Just like when two more states were added to the early window, Nevada and South Carolina," there is a sense that, just like America isn’t stagnant, "that the Democratic Party changes and grows with the times as well," said rules committee member Randi Weingarten, president of the American Federation of Teachers. 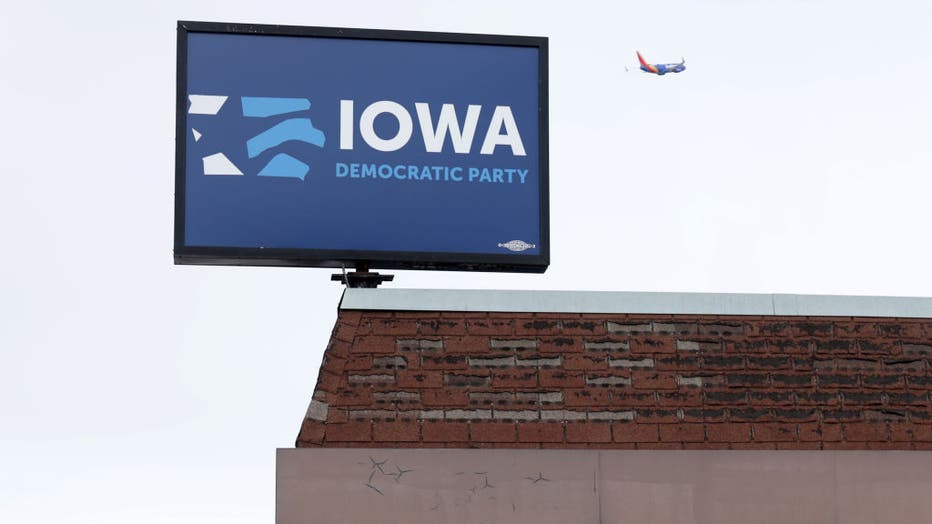 An exterior view of the Iowa Democratic Party headquarters is seen February 4, 2020 in Des Moines, Iowa.

New Hampshire Democratic National Committeeman Bill Shaheen said he didn’t know what would’ve happened if the rules committee vote wasn't postponed, but cheered it as "one more chance to show what kind of state we are."

When the DNC approved shaking up the primary calendar ahead of 2008, it called for Nevada's caucus after Iowa and before New Hampshire, only to see New Hampshire move up its primary. Shaheen said his state might do similar this time, regardless of the party's decision.

"We’re going to do the first primary whether the DNC recognizes it or not," said Shaheen whose wife, Jeanne, is a senator. "There’s a great likelihood of that."

Those pushing for more diverse states to leadoff say Democrats can impose sanctions to prevent such jockeying this time.

Non-white voters made up 26% of all voters and supported Joe Biden over Donald Trump by a nearly 3-to-1 margin in the 2020 presidential election, according to AP VoteCast, a nationwide survey of the electorate. Nonwhite voters accounted for 38% of Democratic voters then.

By contrast, 91% of 2020 Iowa Democratic caucus goers were white and 94% of New Hampshire primary voters were, according to VoteCast surveys.

Rep. Debbie Dingell, D-Mich., who is helping lead her state’s push to go early, said Michigan reflects diversity "and that’s what we are missing in these early primaries."

"We are not testing candidates in what their general election’s gonna look like," said Dingell, who added that Michigan's "got more county fairs than anyone could want." That recalls Iowa's state fair, where generations of presidential candidates have worked the porkchop grill and wolfed down deep-fried versions of all imaginable foodstuffs.

If the rules committee approves a reshuffled framework, it would still have to be sanctioned by the full Democratic National Committee, though it usually endorses such decisions.

This may be moot if Biden opts to seek a second term. In that case, the party likely will have little appetite to build out a robust primary schedule potentially allowing another Democrat to challenge him for the nomination.

Some rules committee members suggested that the White House has taken a keener interest in the primary calendar process recently, but others expressed frustration that the Biden administration hasn't given them clearer guidance on where its preferences lie.

In addition to diversity, Democrats are considering electoral competitiveness and states' efforts to relax voting restrictions. They're scrutinizing states’ racial makeup, union membership and size in terms of population and geography — which can affect possibilities for direct voter engagement and travel and advertising costs.

After results malfunctions that kept The Associated Press from declaring a winner, Iowa Democrats have proposed changing the caucus' presidential preference portion to require that all participants mail in their selections. But there also had been calls for a decade-plus from top Democrats to move the starting line elsewhere, thus highlighting the party’s growth and potential among younger voters and those of color.

Advocacy groups have cheered Nevada’s bid for first, with Latino Victory, the board of the Asian American Action Fund, the Congressional Hispanic Caucus’ Bold PAC, Somos Votantes and ASPIRE PAC, which represents Asian American and Pacific Islander members of Congress, endorsing it.

Castro said that his position was once an outlier that irked party bosses but increasingly become accepted among top Democrats.

"This time feels different," he said. "After the experience of Iowa in 2020 — and after the push for equity and racial justice the last two years, the recognition that the Democratic Party is the only big tent party, the only inclusive party — it’s fitting that our primary calendar would reflect that."