As war rages in Europe and rising prices cause economic uncertainty in the U.S., President Joe Biden visited the Duluth-Superior region Wednesday for his first event after the State of the Union address.

SUPERIOR, Wis. (FOX 9) - As war rages in Europe and rising prices cause economic uncertainty in the U.S., President Joe Biden visited the Duluth-Superior region Wednesday for his first event after the State of the Union address.

During a speech at the University of Wisconsin-Superior's student union, Biden promoted infrastructure spending, called on Congress to move forward with his stalled climate and child care agenda, and projected an image of unity against Russian aggression.

"We the United States of America stand with the Ukrainian people," Biden said. He said the sanctions that the U.S. and European Union has imposed on Russia have made President Vladimir Putin "now isolated in the world more than ever." 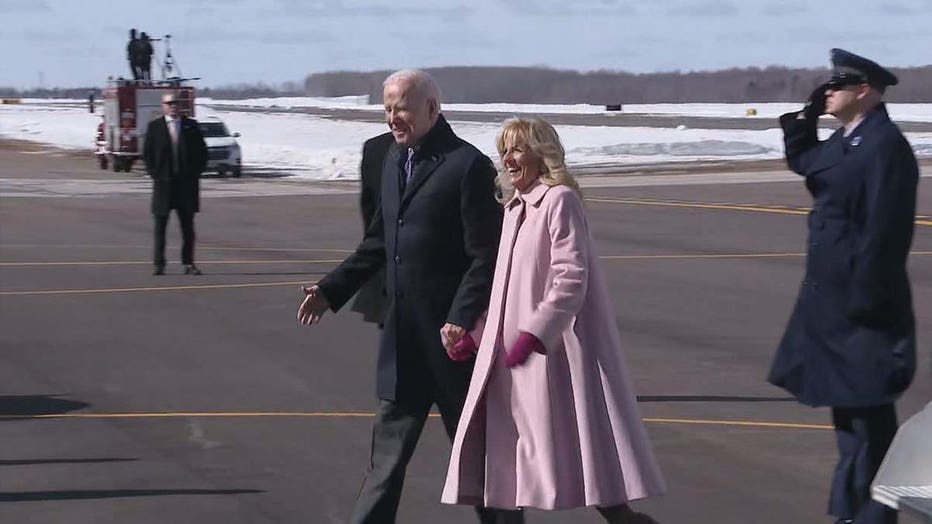 After landing in Duluth, Biden's motorcade made a brief stop at the Blatnik Bridge that carries Interstate 535 between Duluth and Superior. The bridge, built in 1961 and co-owned by Minnesota and Wisconsin, is deteriorating and will require replacement within the next 10 years, Minnesota Department of Transportation officials say.

The 61-year-old bridge "is at the end of its useful life," Biden said, adding that both states will use infrastructure money to repair or replace it.

Minnesota is in line to receive $4.8 billion for roads and bridges through the 2021 infrastructure law, though some of it was money that would've flowed to the state regardless of whether the legislation had passed. Wisconsin stands to get $5.4 billion.

Biden's visit was also aimed at shoring up support in two key states during this fall's midterm elections. Minnesota Gov. Tim Walz and Wisconsin Gov. Tony Evers are both up for re-election. Both governors greeted Biden on the airport tarmac in Duluth and spoke ahead of the president, touting state the infrastructure law's impacts.

A Marquette University Law School Poll released just before Biden's visit showed the president with 43 percent approval in Wisconsin, down from 49 percent from the same poll in August.

Biden is overseeing economic uncertainty in the U.S. caused by inflation, which is at its highest level in 40 years. Oil prices have topped $100 a barrel after Russia invaded Ukraine, causing gas prices to surge.

"The American people are having to spend far more money on their energy, whether they’re burning propane or natural gas for their heating fuel, gasoline or diesel for their automobiles," U.S. Rep. Tom Tiffany, a Republican who represents Wisconsin's 7th congressional district, told reporters. "They’re paying far more for energy, and it’s leading to decline in America."

Republicans said Biden weakened the U.S.'s international standing by canceling a permit for the Keystone XL pipeline and through his hasty withdrawal of U.S. troops from Afghanistan, which allowed the Taliban to quickly retake the country.

Biden, pivoting to inflation during his speech, said rising prices were because of a faster-than-expected economic recovery and supply chain disruptions caused by the COVID-19 pandemic.

"Our top priority must be getting prices under control," he said. 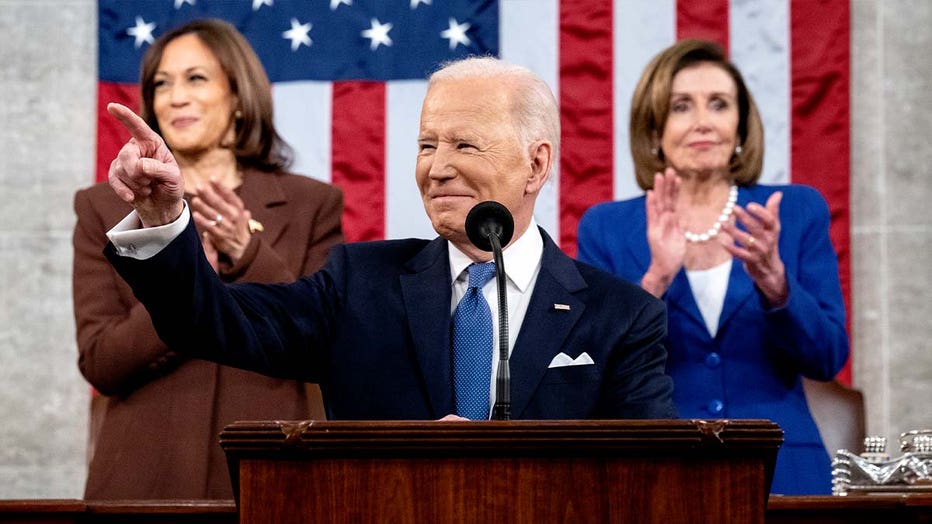 WASHINGTON, DC - MARCH 01: US President Joe Biden delivers the State of the Union address as U.S. Vice President Kamala Harris (L) and House Speaker Nancy Pelosi (D-CA) look on during a joint session of Congress in the U.S. Capitol House Chamber on M

The trip comes a day after Biden vowed in his first State of the Union address Tuesday night to check Russian aggression in Ukraine, tame soaring U.S. inflation and deal with the fading but still dangerous coronavirus.

Tuesday, Biden projected an image of a country overcoming COVID-19, speaking in a maskless House chamber in the U.S. Capitol.

The event at UW-Superior had a much different look. Masks were required at the Superior event because of requirements put in place by the university that do not end until March 12.