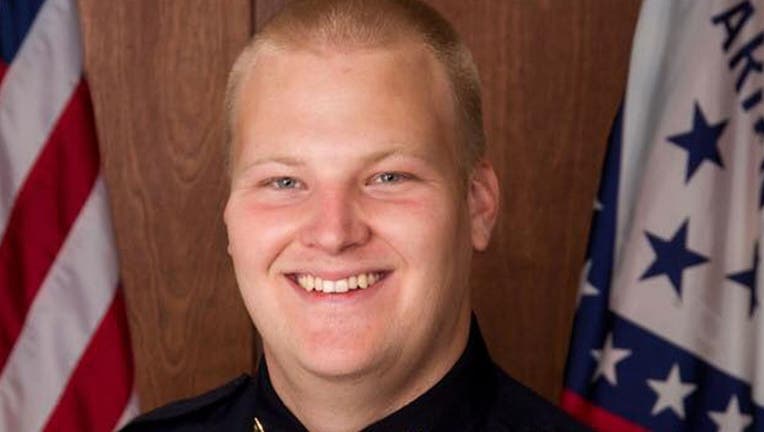 FAYETTEVILLE, Ark. - A police officer in Arkansas was shot and killed as he sat in his patrol vehicle outside his police station Saturday night before the suspected shooter was gunned down by responding officers in a nearby alley, according to officials.

The Fayetteville Police Department said in a news release the incident happened around 9:42 p.m. when officers inside the station heard gunshots, went outside and heard additional gunshots before encountering a suspect behind the police department fleeing the area. After a confrontation where the suspect was shot and killed, deputies discovered Officer Stephen Carr shot inside his patrol vehicle.

“It appears the suspect came into the back parking lot and just executed my officer,”  Fayetteville Police Chief Mike Reynolds said at a brief news conference.

Reynolds told reporters that the suspect, 35-year-old London Phillips, of Fayetteville, was chased into an alley between the police department and the city prosecutor's office. Officers then "engaged the suspect," and shots were fired, injuring Phillips.

Three minutes after the shooting was reported, police said that emergency medical personnel responded to the scene, but both the officer and suspected shooter died of their injuries.

"Evidence shows that Officer Carr was ambushed and executed while sitting in his patrol vehicle," police said. Reynolds said the officer had been waiting for his partner in the parking lot when the shooting happened.

Carr was hired by the Fayetteville Police Department in April 2017 and was assigned as a patrol officer in the Dickson Street entertainment district. Police called him a "hero," and said he served with dedication and professionalism for 2 1/2 years.

"We would like to thank our community for their outpouring of support, along with our local, state, and federal law enforcement partners for their quick response and assistance," police said. "Our thoughts and prayers are with Officer Carr’s family during this tragic time."

The police department said in a news release that a preliminary investigation also shows that two officers, whose names will not be released at this time, fired at the suspect.

"These officers have been placed on paid administrative leave in compliance with city and police department policy until the Chief of Police is able to review the findings of the investigation," the department said.

Reynolds, who told reporters he didn't know of a motive, said that the Washington County Sheriff's Office and the Federal Bureau of Investigation were working the crime scene.

Police said in a news release that several law enforcement agencies would be involved in the investigation.

The gunfire sparked a scare at the nearby city square, where a crowd was taking in the Lights of the Ozarks installation and heard the gunshots, the Northwest Arkansas Democrat-Gazette reported.

Police stressed there was no threat to the public.

"We think about stuff like this and we know it could happen here, but you hope it never does," police spokesman Sgt. Anthony Murphy told the newspaper. "It happened here. Now we're here to pick up the pieces."

The fatal Arkansas shooting followed the shooting death of a Houston police officer Saturday night, who was shot multiple times while responding to a domestic violence call.

Working in law enforcement has been one of the most dangerous jobs in America. As of early December, 113 officers had died in the line of duty this year, with causes running the gamut from vehicular accidents and medical emergencies to homicides, according to data from the Officer Down Memorial Page.

Fox News' Greg Norman and the Associated Press contributed to this report.