The gross domestic product, which is the broadest measure of economic health, fell at an annual rate of 5 percent in the first three months of 2020.

NEW YORK - U.S. equity markets curbed the bulk of their losses Friday after President Trump announced a new wave of crackdown efforts on China, but stopped short of instituting new sanctions or upending the trade deal between the two countries.

All three of the major averages posted weekly and monthly gains.

Trump's new initiatives include limiting some foreign nationals entering the U.S., a working financial markets group to examine Chinese companies listed on U.S. exchanges and the termination of America's relationship with the World Health Organization.

Meanwhile, at least nine states and Washington D.C. eased lockdown restrictions on Friday, with Illinois allowing outdoor seating at bars and restaurants and Michigan letting nonessential medical procedures resume. Washington will now permit outdoor seating at restaurants and the reopening of barber shops as well as curbside pickup and delivery for non-essential retail.

Looking at stocks, China-based companies were in focus and social-media companies remained under a watchful eye after the president on Thursday issued an executive order that targets a liability shield, given to tech companies by Congress, if they “engage in censoring or any political conduct.”

Trump lashed out against Twitter on Friday, saying the company is “doing nothing about all of the lies & propaganda being put out by China or the Radical Left Democrat Party” while targeting conservatives. 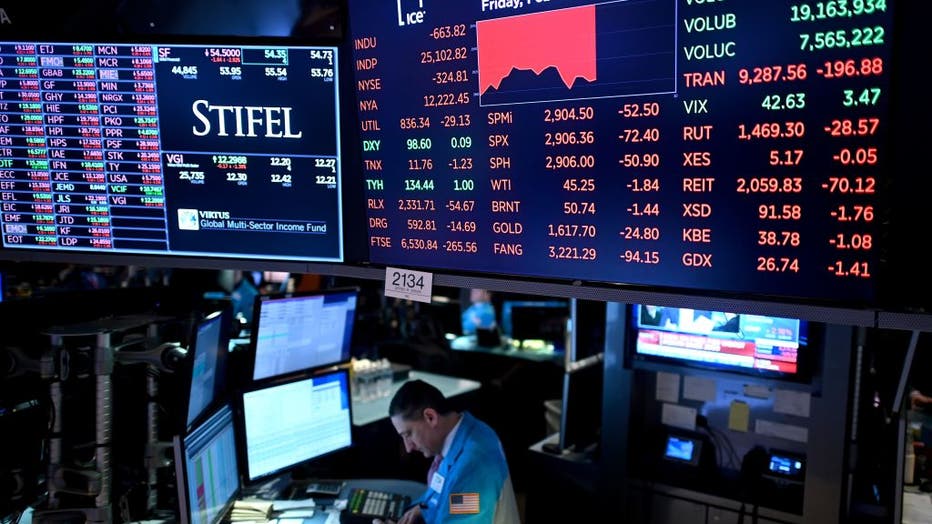 Traders work during the opening bell at the New York Stock Exchange (NYSE) on February 28, 2020 at Wall Street in New York City. - Losses on Wall Street deepened following a bruising open, as global markets were poised to conclude their worst week si

Tesla CEO Elon Musk has the option to buy more than 1.6 million shares at $350.02 each -- less than half their current price -- after the stock’s performance exceeded targets set by the board of directors. Exercising that right would net Musk nearly $800 million.

In the tech industry, Dow component Cisco Systems acquired the cybersecurity software firm Thousand Eyes for about $1 billion, according to Bloomberg.

On the earnings front, Costco reported mixed fiscal third-quarter results and said global comparable sales fell in April as a result of stay-at-home orders, social distancing and the temporary closure of some locations.

Nordstrom said first-quarter sales slumped 40 percent from a year ago as COVID-19 led to the temporary closure of its stores. The company expects all of its stores to be reopened by the end of June.

Commodities posted monthly gains with oil rising over 88 percent to $35.49 per barrel, the biggest monthly gain on record, while gold rose to $1,736.90 an ounce.

U.S. Treasurys rallied, driving down the yield on the 10-year note to 0.65 percent.

European markets were lower across the board, with Britain’s FTSE down 2.29 percent, Germany’s DAX tumbling 1.65 percent and France’s CAC falling 1.59 percent.