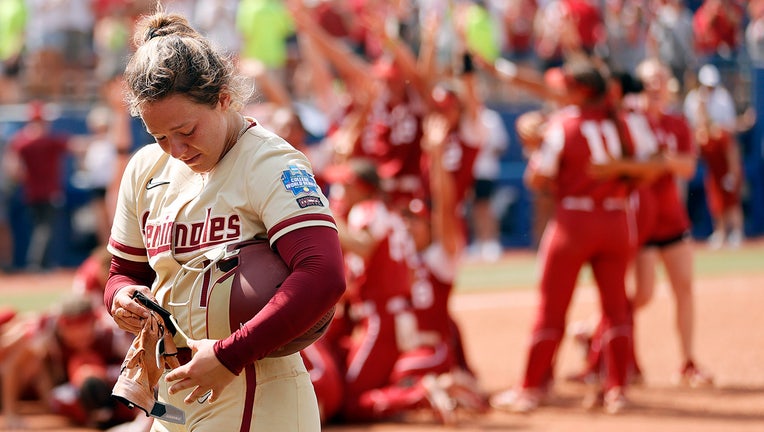 The Sooners had lacked a dominant pitcher heading into the series but Juarez answered the call, allowing one run on two hits in the decisive Game 3. Oklahoma won Game 2 6-2 behind Juarez, who went 5-0 at the World Series and was named Most Outstanding Player. She allowed four runs in 31 1/3 innings.

Much of the crowd stood when Juarez took the circle in the seventh inning. Fittingly, the final out was a popup into her glove. Teammates mobbed her and "Boomer Sooner" blared over the sound system as the crowd of mostly Oklahoma fans celebrated the win just 25 miles from campus.

It wasn’t easy for the top-seeded Sooners — they came out of the losers’ bracket after dropping a stunner to Odicci Alexander and unseeded James Madison in the tournament’s opening game. But Oklahoma beat James Madison twice in the semifinal round, then recovered from a loss to Florida State in the championship series opener.

Jocelyn Alo homered in Game 3, her 34th of the season, extending her school single-season record. The USA Softball Collegiate Player of the Year hit four homers in the World Series, including the go-ahead blast in Game 2.

Left fielder Mackenzie Donihoo went 10-for-21 in the World Series and made several outstanding catches during the week.

Florida State (49-13-1) was seeking its second national championship in the past three World Series under coach Lonni Alameda. Kathryn Sandercock gave up one hit in 3 1/3 innings of relief in the final game. She won three games at the World Series.

Florida State freshman Kaley Mudge set the record for most hits in a Women’s College World Series with 14.

Alo’s homer got things started for Oklahoma on Thursday. Freshman Jayda Coleman poked one just over the fence in the second inning to give the Sooners a 2-0 lead and the early jolt they’ve been lacking for much of the week.

Florida State scored in the third when Oklahoma’s Tiare Jennings lost a popup in the sun, allowing Kalei Harding to score.

Oklahoma responded quickly. With the bases loaded and two outs in the third, Jennings scored on a wild pitch by freshman reliever Emma Wilson. Coleman then hit a hard line drive off the left field wall to score two and give the Sooners a 5-1 lead.