The Dodgers' Clayton Kershaw will take the mound to start for the National League.

LOS ANGELES - Dodgers ace Clayton Kershaw will start for the National League on Tuesday night in the first All-Star Game at Dodger Stadium since 1980, and Tampa Bay’s Shane McClanahan will be on the mound for the American League.

Los Angeles Angels two-way star Shohei Ohtani will lead off for the AL as the designated hitter. Last year, he was the starting pitcher and led off as the DH in the AL’s 5-2 win at Denver.

Ohtani is 9-4 with 2.38 ERA on the mound this year, striking out 123 in 87 innings. The reigning AL MVP shut down Houston in his last outing Wednesday, and there was speculation he might start this Southern California showcase.

Ohtani said Monday that he won't pitch in the All-Star Game and instead will start the Angels' first game after the break, on Friday in Atlanta.

"From the information that we received from Ohtani’s camp was that, you know, he probably shouldn’t or wouldn’t start, and so then that’s why we chose Shane," AL manager Dusty Baker of the Astros said Monday.

"They just said they preferred that, you know, he doesn’t pitch," Baker said.

RELATED: MLB All-Star Game 2022: What to know about the Mid-Summer Classic

"It’s hard, because obviously Sandy Alcantara, Tony Gonsolin, Max Fried, all these guys have better numbers than I do and they should be starting this game and I get that," Kershaw said. "But all that to say, I am just so excited I get to do it here at Dodger Stadium."

Kershaw, who passed Don Sutton in April for the team career strikeouts lead, will become the third Dodgers pitcher to start in the last seven All-Star Games, following Zack Greinke in 2015 at Cincinnati and Hyun Jin Ryu in 2019 at Cleveland. He will be the 13th pitcher to start in his home ballpark, the first since former teammate Max Scherzer in 2018 at Washington.

"I think because we are here in Los Angeles, the home of the Dodgers ... you toss this around and I’m thinking, Clayton’s name just kept coming to the forefront to start this game," NL manager Brian Snitker of Atlanta said. "I think his reputation, what he’s meant to the game of baseball, the Los Angeles Dodgers, I think it’s just perfect that he start this game for us in the National League."

Ohtani is 0 for 8 as a hitter against Kershaw. Last Friday night in Anaheim, Kershaw took a perfect game into the eighth inning and held Ohtani hitess in three at-bats, striking him out twice.

"I don’t know how I got him out. I guess I’ll try to get him out again tomorrow and see what happens." Kershaw said. 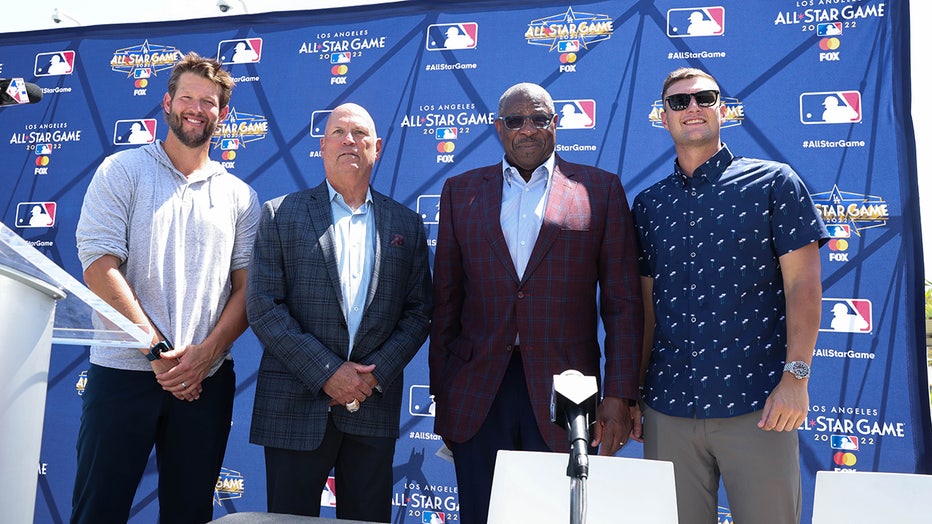 In a matchup of left-handers, McClanahan becomes the second Rays pitcher to start an All-Star game after David Price in 2010 at Anaheim. McClanahan, a first-time All-Star, is 10-3 with a major league-leading 1.71 ERA and 147 strikeouts in 110 2/3 innings.

"Tell you the truth, I’ve never seen him pitch and we didn’t play him at all this year, but everybody that I’ve talked to told me that he is nasty," Baker said, forgetting that McClanahan relieved against the Astros in Game 6 of the 2020 AL Championship Series.

Willson and William Contreras are the first set of brothers to make the All-Star rosters in the same year since Aaron and Bret Boone in 2003. The Contreras siblings are the fifth pair of brothers to start together in the All-Star Game, joining Mort and Walker Cooper in 1942 and ’43, Dixie and Harry Walker in 1947, Joe and Dom DiMaggio in 1949 and Roberto and Sandy Alomar Jr. in 1992.