WASHINGTON (AP) - President Donald Trump said Wednesday the federal government will not be extending its coronavirus social distancing guidelines once they expire Thursday, and his son-in-law and adviser, Jared Kushner, predicted that by July the country will be “really rocking again.”

Meanwhile, Trump said he plans to resume official travel with a trip to Arizona next week. And he said he's hoping to hold mass campaign rallies in the coming months with thousands of supporters, even though medical experts have said there is little hope of having a vaccine by then.

Putting a positive face on the latest grim numbers — the U.S. death toll has now surpassed those in the Vietnam War — Trump delivered his daily upbeat update and Kushner described the administration's much-criticized response to the pandemic as "a great success story.”

Trump also talked up the good news the day provided: hopeful results for a possible COVID-19 treatment. But the government announced dismal new economic numbers as the pandemic took hold and shut down much of the country.

The U.S. economy shrank at a 4.8% annual rate in first quarter of the year — a precursor to far grimmer reports that are expected this summer from the severe recession triggered by the pandemic.

The White House has been trying to pivot to a new stage of the crisis, focused on efforts to reopen the nation's economy state-by-state amid concerns that lifting restrictions too quickly and without sufficient testing and contact tracing will spur a resurgence.

“We’re heartened that the worst of the pain and suffering is going to be behind us," Trump said as he led a roundtable with executives from companies like Hilton and Toyota.

Trump laid out a vision of a return to pre-coronavirus normalcy — “with or without” a vaccine — with packed restaurants and filled stadiums. That vision flies in the face of sober assessments from doctors who say the country will need to embrace a “new normal" that includes extended social distancing and mask-wearing.

“I don’t want people to get used to this,” Trump told reporters. “I see the new normal being what it was three months ago.”

To underscore his confidence, Trump announced that he plans to resume out-of-state travel after spending more than a month mostly cooped up in the White House. He said he's planning a trip to Arizona next week, followed by a possible trip to Ohio, even as much of the country remains under effective lockdown with all but essential travel banned.

“We’re going to start to move around and hopefully in the not-too-distant future, we’ll have some massive rallies and people will be sitting next to each other,” he said, adding that having people spaced out in accordance with social distancing guidelines “wouldn’t look too good.” 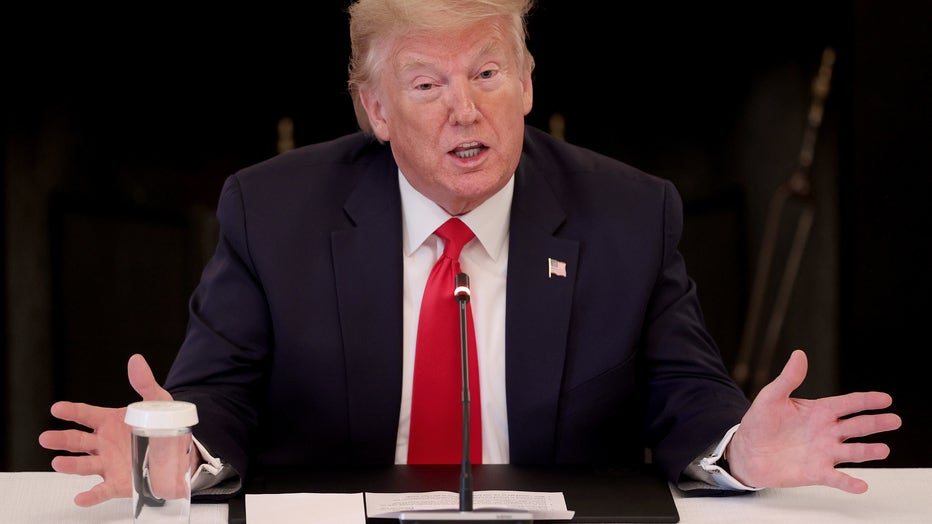 FILE - U.S. President Donald Trump speaks while meeting with industry executives during an event on "Opening Up America Again" at the White House on April 29, 2020 in Washington, DC. (Photo by Win McNamee/Getty Images)

He didn't say exactly when he envisioned such rallies returning, but said the timing would depend, in part, on the states, since some have had far fewer cases than others. The federal government and most states have urged residents to avoid mass gatherings and to remain at least six feet apart.

The announcement came after Trump said he will not be extending the White House's “30 Days to Slow the Spread” guidelines when they expire Thursday.

“They’ll be fading out because now the governors are doing it,” Trump told reporters in the Oval Office as he met with John Bel Edwards, the Democratic governor of Louisiana.

Those guidelines — which were originally supposed to last 15 days and were then extended an additional 30 — encouraged Americans to work from home and avoid restaurants, group gatherings and discretionary travel and advised older Americans and those with serious underlying health conditions to isolate themselves.

Vice President Mike Pence said the guidelines have been incorporated into the new guidance issued by the White House earlier this month that lays out how states can gradually ease restrictions and begin to reopen as the rate of new cases slows.

Edwards, who recently extended Louisiana’s stay-at-home order through May 15, is currently under fire from Republican lawmakers in his state. While he was in Washington, some GOP legislators were trying to rally support to take the extraordinary step of trying to override the governor’s emergency decision-making.

But Trump commended Edwards on the job he’s done after New Orleans became one of the nation’s coronavirus hot spots. “I just wanted to congratulate you,” Trump said.

At the same time, Trump's campaign released a digital ad praising elements of the federal response. It is set to reach residents of 17 battleground states featuring Democratic governors whose approval ratings have skyrocketed during the crisis.

The White House on Wednesday was also pointing to the prospect of an experimental drug, Remdesivir, which proved effective against the virus in a major new study.

Dr. Anthony Fauci, the nation's top infectious diseases expert, said the drug reduced the time it takes patients to recover by 31% — 11 days on average versus 15 days for those just given usual care.

“It’s highly significant," said the usually cautious doctor. “What it has proven is that a drug can block this virus.”

The White House and Trump in particular have been eager to give the country positive news as they work to move past the crisis and rebuild the economy, even as the country's death tally continues to rise. The U.S. has now recorded more than 58,000 deaths from the virus, surpassing the total number of Americans who were killed in the Vietnam War. More than 1 million people have now tested positive.

Trump said that number has risen so high because of an increase in testing. The country has dramatically improved its testing after a slow and rocky start, but many health experts say the country still must do more — as many as 5 million tests a day — to safely reopen. Otherwise, they warn, cases will skyrocket as Americans return to work.

“The only thing worse than an unnecessarily slow recovery is a reversed recovery,” Joshua Bolten, the president of the Business Roundtable, an association of prominent CEOs, said during the White House event.

Meanwhile, Kushner, who has been helping lead response efforts, said in an interview with “Fox and Friends” that he believes May will be “a transition month" and that, "by June, a lot of the country should be back to normal. And the hope is that ... by July the country is really rocking again."

“I think that we’ve achieved all the different milestones that are needed,” he claimed. "So the federal government rose to the challenge, and this is a great success story."