According to ﻿Cal Fire﻿, the Los Angeles-area blaze was one of eight active fires burning throughout the state Friday.

LOS ANGELES - A raging wildfire along the northern edge of Los Angeles forced thousands of people from their homes early Friday and at least one death was reported in connection to the blaze.

“We need people to leave now while they can,” fire officials warned during a press conference Friday morning. "If you stay in [mandatory evacuation] areas we cannot guarantee that we will save you.”

Fire Chief Ralph Terrazas said the blaze, called the Saddleridge Fire, had scorched more than 4,700 acres and at least 25 homes had been damaged. 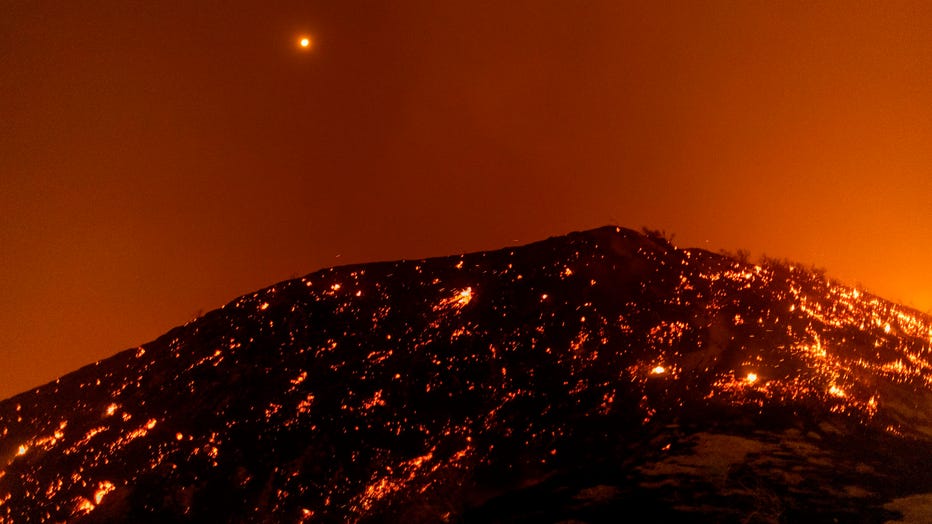 The moon shines through the smoke over a hillside of embers of the Saddleridge Fire in the Porter Ranch section of Los Angeles, California in the early morning hours of October 11, 2019. (Photo: DAVID MCNEW/AFP via Getty Images)

Terrazas said there were sustained winds of 20-25 mph with gusts over 50 mph and relative humidity levels had fallen as low as 3 percent.

"As you can imagine the embers from the wind have been traveling a significant distance which causes another fire to start," Terrazas said.

Helicopters made continuous water drops as firefighters on the ground attacked flames in and around homes. Water- and retardant-dropping airplanes joined the battle after daybreak. About 1,000 firefighters were on the lines.

An adult male died after going into cardiac arrest on Thursday night, officials said. A firefighter was also injured and transported to an area hospital.

According to Cal Fire, the Los Angeles-area blaze was one of eight active fires burning throughout the state Friday.

Evacuations were also still in effect in the inland region east of Los Angeles where a fire erupted Thursday and raged through a mobile home park in the Calimesa area of Riverside County, called the Sandalwood Fire.

Cal Fire spokeswoman Cathey Mattingly said at least one person was killed and there were also some injuries.

It had burned at least 800 acres and was 10 percent contained as of Friday, fire officials reported.  A total of 74 buildings were destroyed and others were damaged.

Fire danger is high throughout Southern California after the typically dry summer and early fall, and the notorious Santa Ana winds — linked to the spread of many wildfires — bring a dangerous mix of witheringly low humidity levels and powerful gusts.

Pacific Gas & Electric also cut power to hundreds of thousands of customers this week across Northern and Central California to reduce wildfire risks with gusty winds and dry conditions in the forecast. 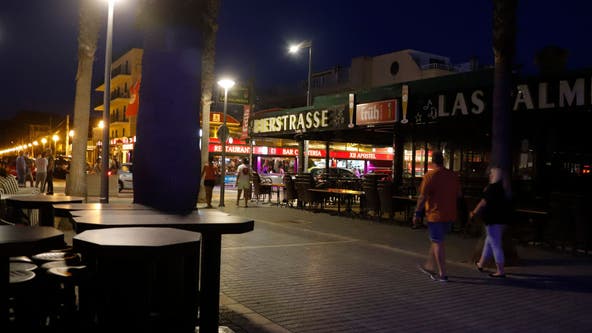