WASHINGTON - Bryant Johnson, the longtime personal trainer of the late Supreme Court Justice Ruth Bader Ginsburg, dropped in front of her casket Friday and did push-ups as a personal tribute to her while paying his final respects.

When it was his turn to approach the flag-draped casket holding Ginsburg, who died Sept. 18 at age 87, Johnson could be seen doing a quick trio of push-ups.

Ginsburg worked out with Johnson for more than 20 years. The pair started in 1999 following her treatment for colorectal cancer. Ginsburg had said she needed to do something to rebuild her strength. 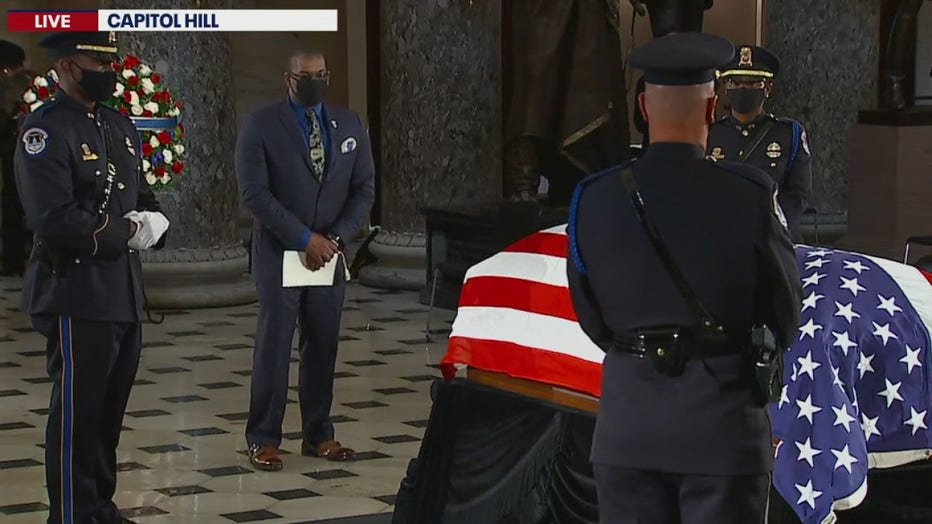 Ginsburg’s fitness regime later became part of her public image, with details of her routine published in the 2015 book “Notorious RBG: The Life and Times of Ruth Bader Ginsburg.”

In 2017, Johnson also released a book about Ginsburg's sweat sessions, titled "The RBG Workout: How She Stays Strong...and You Can Too!" Some of Ginsburg’s exercises included push-ups and the core-strengthening plank.

During an appearance that same year, Ginsburg noted: “A very important part of my life is my personal trainer.”

Her commitment to fitness was also profiled in the 2018 documentary “RBG” and even inspired a viral “Late Show With Stephen Colbert” sketch, which also included Johnson. Wearing a sweatshirt with “super diva” scrawled across the front, Ginsburg told Colbert that she listened to “mostly opera recordings” during her workouts.

On Friday, Ginsburg became the first woman in American history to lie in state at the U.S. Capitol. Thousands of people also paid their respects to the leader of the court’s liberal bloc this week at the Supreme Court, including President Donald Trump and first lady Melania Trump.

Ginsburg, only the second woman to ever serve on the Supreme Court, will be buried next week in Arlington National Cemetery beside her husband, Martin, who died in 2010.