The Laugh Factory on Monday changed its marquee in support of fellow comedian Chris Rock amid the Will Smith controversy.

LOS ANGELES - Amid the Will Smith-Chris Rock controversy that ensued post-Oscars slap, the legendary Laugh Factory is showing its support for Rock loud and clear. 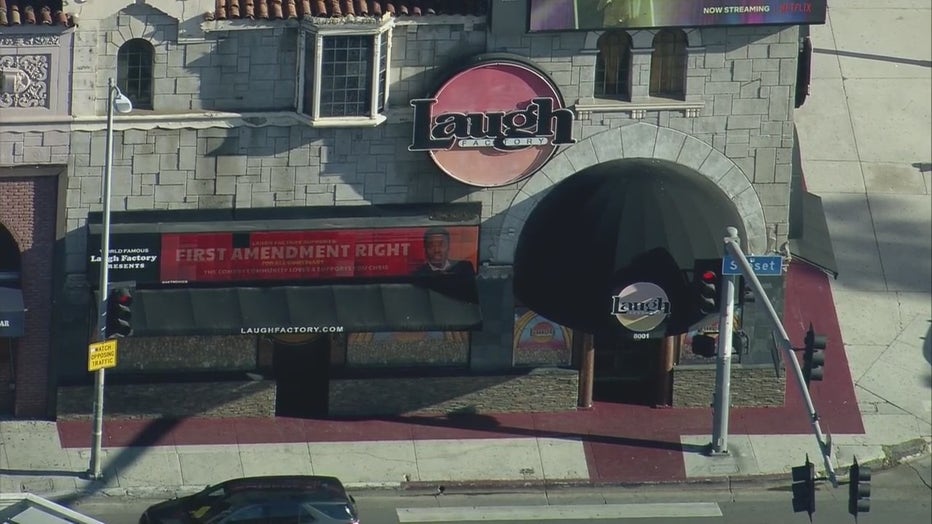 The Laugh Factory on Monday changed its marquee to rally behind Rock. The marquee's display had a picture of Rock alongside a bold statement: 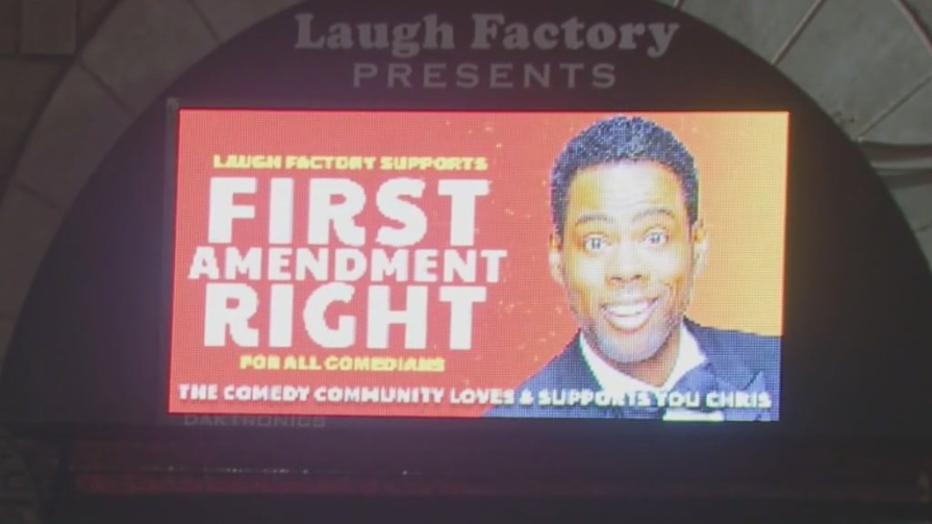 Since Sunday night's incident, the viral on-stage slap heard around the world has left many divided.

But fellow comedians were outspoken on what happened.

"Let me tell you something, it’s a very bad practice to walk up on stage and physically assault a comedian," Kathy Griffin wrote on Twitter. "Now we all have to worry about who wants to be the next Will Smith in comedy clubs and theaters. 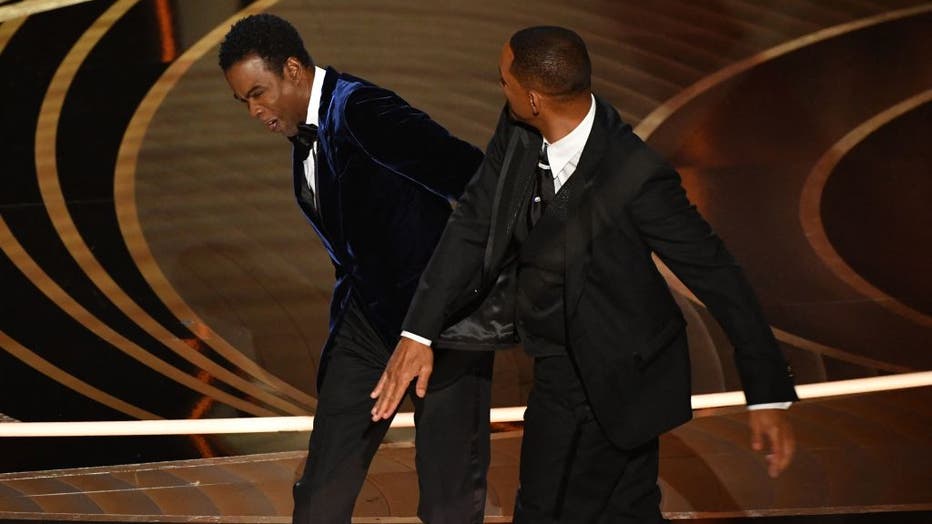 US actor Will Smith (R) slaps US actor Chris Rock onstage during the 94th Oscars at the Dolby Theatre in Hollywood, California on March 27, 2022. (Photo by ROBYN BECK/AFP via Getty Images)

George Takei said Smith’s losing his cool was a bad look when so many people were watching: "Many people, especially kids, look up to actors. Because of that, we have an obligation to try to be good role models. With celebrity comes responsibility."

Judd Apatow was highly critical of Smith in a now-deleted Twitter post, describing the attack "out of control rage and violence." He noted that celebrities have been the target of jokes for decades: "They’ve heard a million jokes about them in the last three decades. They are not freshman in the world of Hollywood and comedy. He lost his mind."

In a statement, the film academy said it will also "explore further action and consequences in accordance with our Bylaws, Standards of Conduct and California law."

Richard Marx said no poor joke justified the response: "I guess millions of people can’t comprehend that no level of fame or accolades gives license to commit battery over a verbal joke."

And Mark Hamill called the incident the ugliest Oscar moment ever, tweeting "Stand-up comics are very adept at handling hecklers. Violent physical assault... not so much."

Smith has since issued an apology to Chris Rock for smacking him in the face during the Oscars after the comedian made a joke about Smith's wife, actress Jada Pinkett Smith.

Rock was on stage Sunday night to present the Oscar for best documentary feature, but he peppered in some jokes, including one referencing Pinkett Smith's bald head, suggesting she would be starring in a sequel to "G.I. Jane."

Smith, who was seated in the front of the Dolby Theatre, walked onto the stage and smacked Rock, in a move that initially drew some laughs from the crowd, believing it was a pre-planned comedy skit. But Smith stalked back to his seat, then sternly screamed at Rock twice, telling him to "keep my wife's name out of your (expletive) mouth." 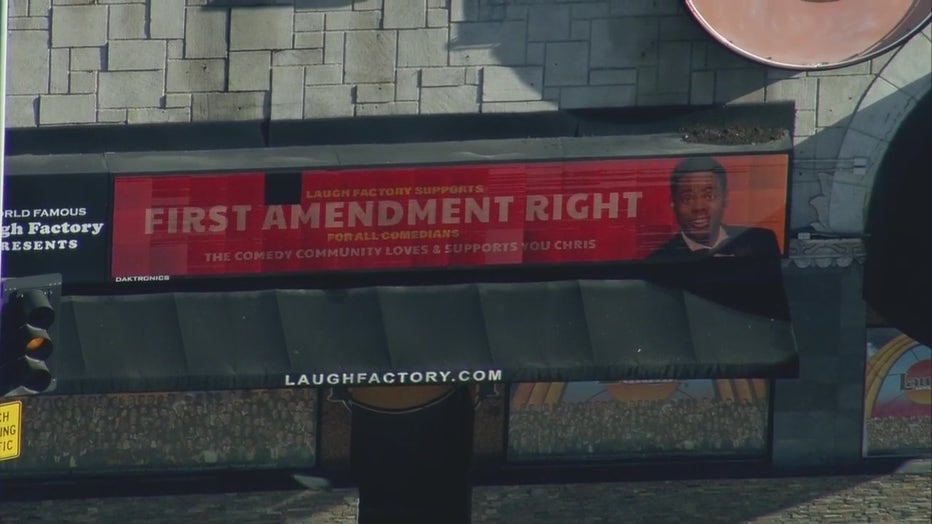 The audience then fell into a stunned silence.

Earlier Monday, The Academy of Motion Pictures Arts and Sciences said it condemns the actions of Smith during Sunday night’s Oscars and it will launch a formal review of his slapping of presenter Chris Rock.

The film academy said it will also "explore further action and consequences in accordance with our Bylaws, Standards of Conduct and California law." 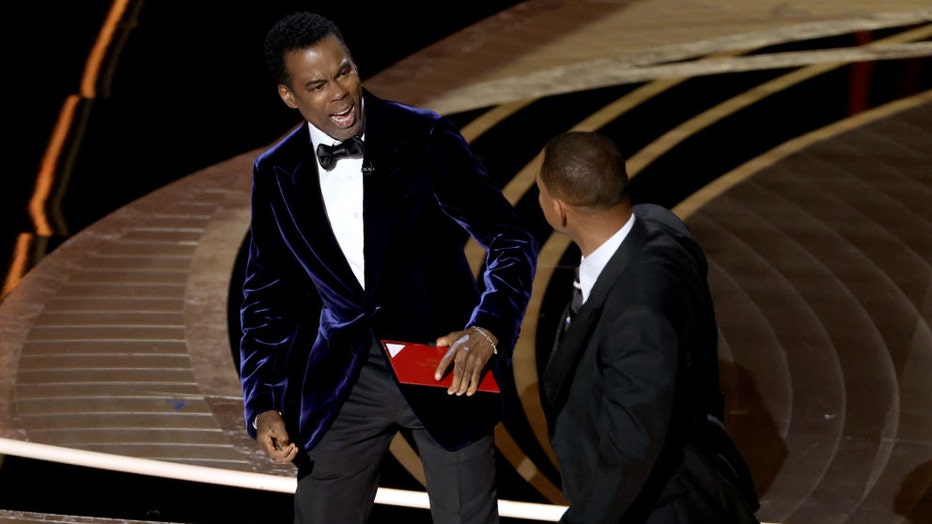