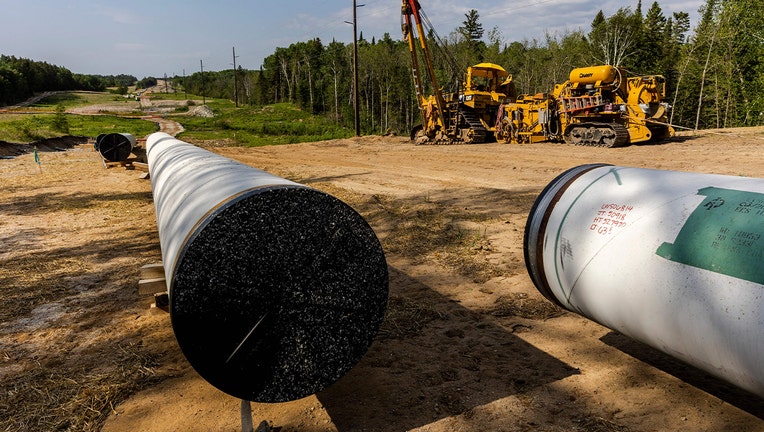 Sections of the Enbridge Line 3 pipeline are seen on the construction site in Park Rapids, Minnesota on June 6, 2021. (KEREM YUCEL/AFP via Getty Images)

The 1,097-mile-long pipeline replaces an aging pipeline built in the 1960s. Once in service, it will carry tar sands oil and regular crude oil from Alberta, Canada across North Dakota and Minnesota to Superior, Wisconsin, restoring the pipeline to its full capacity of 760,000 barrels per day, Enbridge said in a statement.

The 337-mile Minnesota segment of the pipeline—the last section to be completed—has been the subject of a years-long fight. Opponents argued the pipeline violated treaty rights for Native Americans and would risk spills and worsen climate change. However, opponents lost multiple court cases attempting to block construction of the pipeline.

Enbridge says Line 3 oil pipeline complete, will be in service on Oct. 1

Enbridge says the Line 3 oil pipeline is complete and will be in service on Oct. 1.

Earlier this year, Minnesota pollution control regulators reported 28 releases of drilling fluid along the pipeline route. The state Department of Natural Resources ordered Enbridge to pay more than $3 million in September for a groundwater leak after crews pierced an aquifer during construction.

Protests have been taking place for months at project sites in northern Minnesota and last month, opponents held a large rally calling on state and federal leaders to stop construction on the pipeline.

Enbridge President and CEO Al Monaco said in a statement the pipeline will "deliver the low cost and reliable energy that people depend on every day."