New coronavirus clusters have surfaced around the world as nations struggle to balance restarting their economies and preventing infections.

The U.S. Centers for Disease Control and Prevention announced on Twitter that after analyzing 13 different forecasting models of potential COVID-19 deaths in the U.S., all models indicate an increase in coronavirus fatalities in the coming weeks with a cumulative death toll exceeding 100,000 by June 1.

The grim prediction came just hours before President Donald Trump announced Friday at a Rose Garden event that he is hopeful to have a coronavirus vaccine on the market and distributed by the Department of Defense by the end of the year.

Slaoui said Friday that early trial data suggests that “a few hundred million doses of vaccine” will be delivered by late 2020. 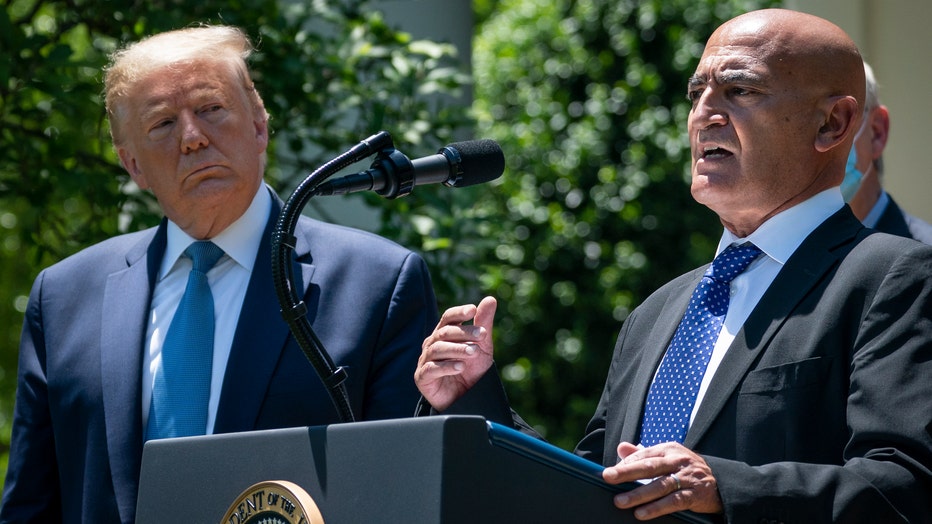 U.S. President Donald Trump listens as Moncef Slaoui, the former head of GlaxoSmithKlines vaccines division, speaks about coronavirus vaccine development in the Rose Garden of the White House on May 15, 2020 in Washington, DC. (Photo by Drew Angerer/Getty Images)

Trump reiterated that he wants to see states move forward with reopening their economies.

Despite both Trump’s and Slaoui’s optimism, ousted head of a Health and Human Services biodefense agency-turned-whistleblower scientist Rick Bright said Thursday before a House committee that the country lacks a comprehensive battle plan against the novel coronavirus in critical areas including masks, testing, treatments and vaccines.

The nation could face “the darkest winter in modern history” if the virus rebounds, the government vaccine scientist told lawmakers.

Bright, a career government official, alleges he was removed as head of the Biomedical Advanced Research and Development Authority after repeatedly warning higher-ups the virus outbreak was going to be worse than the public was being led to believe.

He said the breaking point came when he opposed a White House directive to allow widespread access to hydroxychloroquine, a malaria drug Trump was touting as an effective treatment that was later shown in a VA study to have potential negative effects on patients. The FDA issued a warning against the drug combo’s use outside of hospital and clinical settings due to the risk of negative health outcomes.

Fauci pushes back against Rand Paul’s suggestion that schools reopen

While agreeing that children on the whole do much better than adults with COVID-19, Fauci noted recent reports of severe disease among children and said that the way the virus affects them still not well understood.

As U.S. states begin to restart their economies after months of paralyzing coronavirus lockdowns, medical experts are sounding alarms that it could take weeks until it becomes clear whether those reopenings will cause a spike in COVID-19 cases.

A handful of states started easing their lockdowns about two weeks ago, ranging from shopping malls in Texas to beach hotels in South Carolina to gyms in Wyoming. Georgia was one of the first states where some businesses were allowed to open their doors again, starting April 24 with barber shops, hair salons, gyms, bowling alleys and tattoo parlors.

Amid the reopenings, the country’s top infectious disease expert, Dr. Anthony Fauci, issued a blunt warning Tuesday that cities and states could see more COVID-19 deaths and economic damage if they lift stay-at-home orders too quickly.

“There is a real risk that you will trigger an outbreak that you may not be able to control,” Fauci said in Senate testimony.

The U.S. has the largest coronavirus outbreak in the world by far: 1.37 million infections and more than 82,000 deaths, according to a May 15 tally by Johns Hopkins University.

Worldwide, the virus had infected more than 4.2 million people and killed more than 300,000 as of May 15, according to the Johns Hopkins tally. Experts, including Fauci, say the actual numbers are likely far higher.

When asked by reporters at the Rose Garden event on Friday if he thought the confirmed coronavirus deaths could be higher, Trump replied, “our numbers are accurate.”