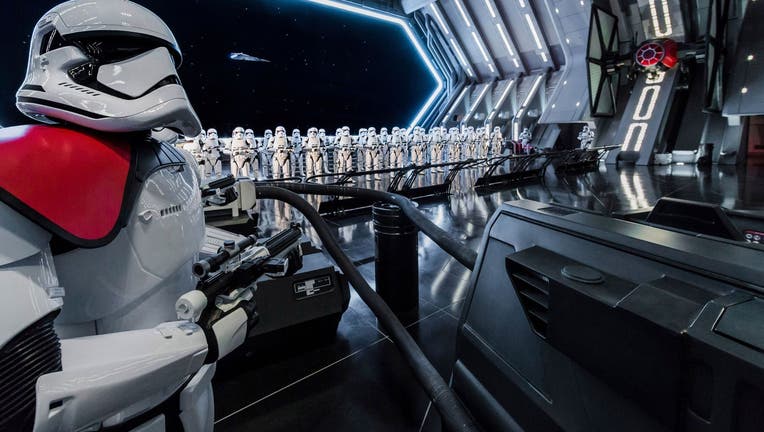 Rise of the Resistance will reportedly feature the main cast from the newest trilogy of 'Star Wars' movies. (Joshua Sudock/Disney Parks)

FOX NEWS - ‘Star Wars’ fans are about to encounter a theme park experience like no other.

Disney unveiled new details about the upcoming attraction Rise of the Resistance, which is set to open later this year on the East Coast and early next year on the West. Apparently, the ride will include multiple systems and the experience will last for about 15 minutes.

When Star Wars: Galaxy’s Edge first opened in both Disney World and Disneyland, only one of the two promised rides was operational at each land. While guests could enjoy the Millennium Falcon: Smugglers Run ride, they would have to wait for Rise of the Resistance to open.

The second attraction is set to open on December 5 at Disney World, in Orlando, Fla., and January 17 in Disneyland's Anaheim, Calif., site. The ride has been slightly shrouded in mystery until Disney recently revealed new details about the unique experience.

The attraction will utilize four different ride systems, Travel and Leisure reports. Clocking in at 15 minutes long, guests will reportedly get to experience the thrill of being chased by Kylo Ren, one of the film series’ main antagonists.

The entire cast of the current slate of ‘Star Wars’ films reportedly participated in the new ride.

The ride will also feature a trackless ride system for part of its duration, according to reports. Guests will also experience an outer space segment that will utilize a motion simulator that the ride vehicles will apparently drop onto.

The attraction will feature special effects, projections and Audio-Animatronic figures. Guests will also reportedly get to experience the experience of taking off from a planet and being captured by the First Order’s forces.