Part 1: Kwame Kilpatrick reflects on past struggles and how he helps others now

Ex-mayor Kwame Kilpatrick talks about the journey he has made from literal prison as well as the emotional and political ones he had to confront.

DETROIT (FOX 2) - It's been more than 20 years since Kwame Kilpatrick was sworn in as Detroit's youngest mayor. It's also been almost a year since he was released from prison after serving seven years of his 28-year prison sentence for federal corruption.

January 4, 2002, Kilpatrick was at the top of his political career. He served in the Michigan House of Representatives from 1996 to 2001 and was even elected house minority leader - the first Black person to do so. Then he was elected Mayor of Detroit and sworn in on that January day 20 years ago with great expectations.

The entire nation witnessed the rise and fall of the Detroit mayor. But now, he's preparing for the next chapter of his life.

Kilpatrick sat down with FOX 2 Detroit's Josh Landon for a candid and wide-ranging conversation about how he's moving forward.

A year after having his sentence commuted by former President Donald Trump, Kilpatrick said he's the best he's been in more than two decades.

"You have to say 20 years for it to seem like it’s been that long. I’m doing so well. I have not been this well since I was in the State House. I’m living abundantly. It’s the first time I’ve been able to do that since the 1990s really. My life has not been in my hands for a very long time. To be at this point, and this time it’s a true manifestation, a miracle in my life. I’m happy, I’m free, not just from a prison or a physical prison, but also a mental, political and emotional one too. That’s a good question, I feel great," he said.

Part 2: Kwame Kilpatrick on Trump, gentrification and his new mission of faith

Kwame Kilpatrick shares his thoughts on President Donald Trump who commuted his sentence, development in Detroit and talks about his newfound faith.

Kilpatrick said he's an entirely different person today than he was before his arrest and conviction - but not new.

"I don’t believe you can have resurrection without crucifixion. I believe what I believe. I’m not ashamed of whom I believe," he said. "The same difference I see here is a resurrected person who has the wisdom of all the things he’s experienced through the crushing, but also through the good times. But is not conformed or deformed by it. The new Kwame Kilpatrick is full of surprises he likes to see what life is going to bring next. He’s older, but younger in his heart. He’s a citizen of the world, and not just of Detroit."

After Kilpatrick's release from federal prison, he's been back in Detroit a few times but is now living out of the state.

He met Landon at Times Square Men's Clothing on Seven Mile and Livernois - which is also known as the Avenue of Fashion. The store has a special place in Kilpatrick's heart: the owner, Al Bartel, tailored his wedding attire last year. 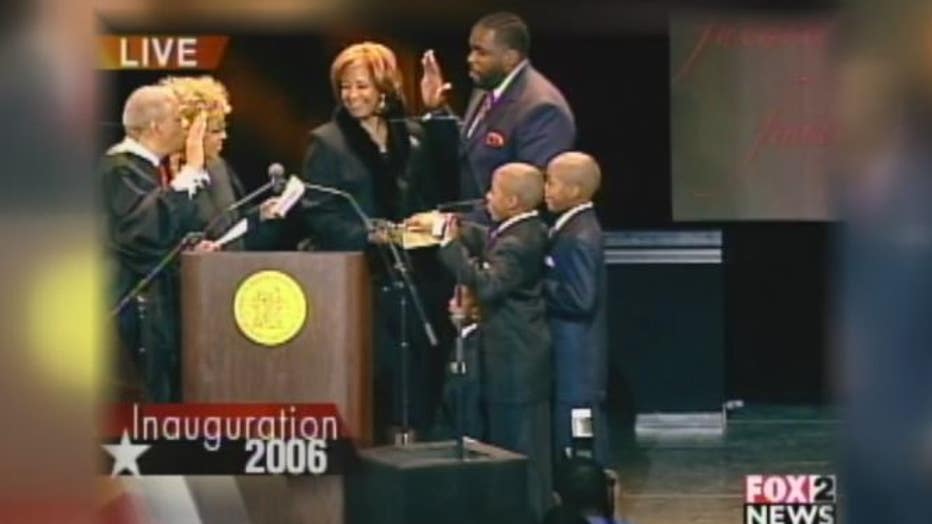 "I don’t think I would be sitting here with you in the spirit that I’m in, without it all working together for my good," he said. "Detroit is great."

Since his release last year, Kilpatrick has reflected on some of the lessons that he's learned that shed light on his life to turn it around.

"The light of understanding first, the light of humility and what that really is and why it’s necessary," he said. "There’s great strength and power in humility, I never understood that before prison," he said. "Also the light of knowledge and wisdom. You can have knowledge, you can learn something, but it really takes time to have wisdom. You really do have to go through some things over time to really say OH, there has to be a shift, a ha-ha moment when you say I get that now. I get why I made those stupid decisions, why I went through what I went through. Why this person I didn’t let out of my life soon enough, so I think those things happen for all people." 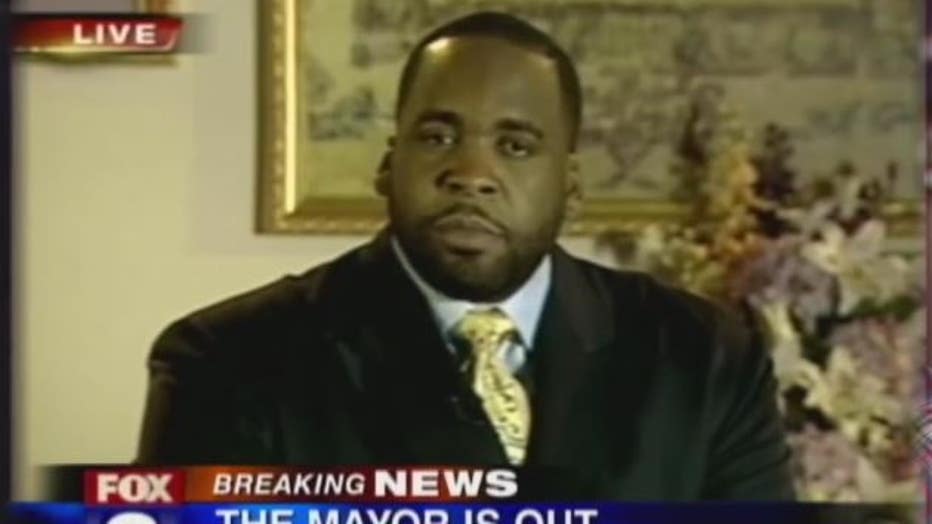 Kilpatrick and his wife, Laticia, are launching Movemental Ministries on January 20, 2022, and he transitions from politics to the pulpit.

"Movemental started in a prison cell. It’s an idea I had gotten when I was reading a book named permanent revolution. In the book, the author made the point that Jesus didn’t come just to build a church to go in and out of, that he came to turn the world upside down and so those first-century apostles did that. They spread the kingdom message at that time Europe, and then move into parts of Asia, Turkey, and so it sounded good to me because I like movements. So he talked about Jesus having a movement, but a missional movement. So those two things coming together, a movement that’s missional," Kilpatrick said.

As he moves forward in his spiritual journey, he said that his own past that he can't escape will help him reach others to spread his message. 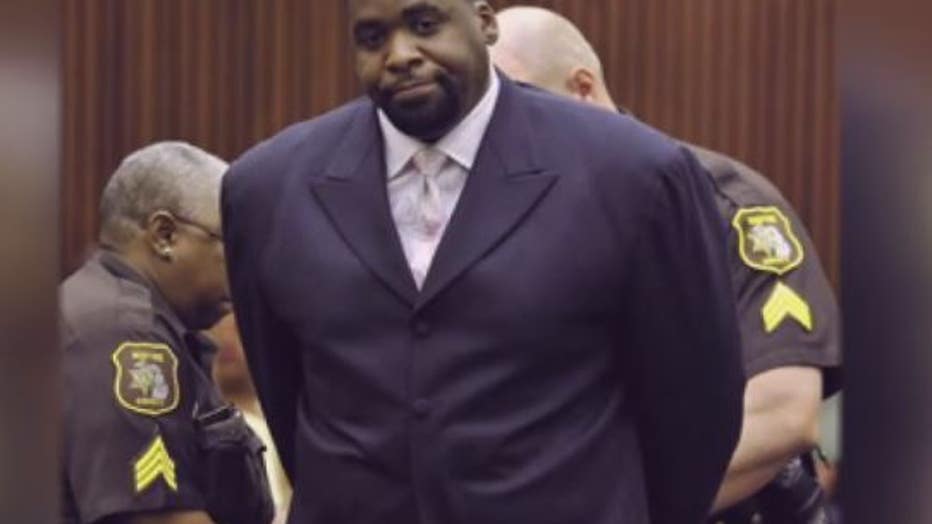 "The craziest thing is that’s exactly what Movemental is about. I don’t know if I could be doing this at a traditional setting because Kwame is not a traditional guy. I have a Google history. I believe people hear from people where that has been a test in their lives. You mention community. We don’t want to hear from inauthentic people. Perfect people make me itch. I can’t feel them. We have nothing in common. But some people portray that in their daily lives."

"That is my heartbeat. Be authentic. I’ve been what you’ve been through, I’ve smoked before, I drank, we know some of the issues I’ve had in the public press, but I don’t do any of that now and it’s not because I got perfect. It’s because I’m at truth."

With the end of his prison sentence and Detroit's continued renaissance, Kilpatrick addressed a wide range of topics, including the man who authorized his release: Former President Donald Trump.

"I don’t think there’s a greater thing you could do for anybody, then to set them free. Whether that’s from a physical prison or an emotional one or a mental one, I don’t care what it is. He with one stroke of his pen, eliminated a 28 sentence that was hanging over my head, and I walked out of prison," he said. "So I thank him immensely. I want to meet him. I want to shake his hand. I want to take to him. I’ve sent a letter because I think it’s deserving. I’m not as emotional about politics as people in the streets."

Kilpatrick said he doesn't have a 'realistic' idea about why his sentence was commuted but said he had faith that it would happen.

"For Donald Trump, all I can talk about is what he’s done for me. I know it’s some other people out doing some things, picketing, but nobody else got me out of a cell and gave me freedom from that prison," he said. 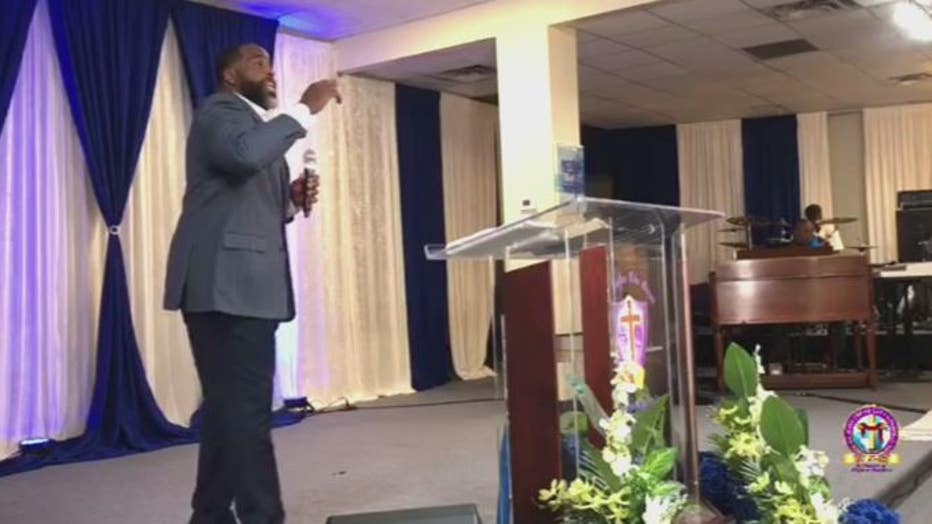 For six years, Kilpatrick served as mayor until he resigned in 2008. His corruption trial and eventual conviction would lead him to prison for 28 years. All the while, scandals, his flashy lifestyle, and even his affair would all become public as they all played a role in the fall of his political career.

And it all played out in front of cameras and on the front page of newspapers. Kilpatrick said the process was all necessary for his turnaround.

"I just can’t talk about it being unfair. I think it was necessary. I was angry at Channel 2,4 and 7. The Free Press and the reporters, and I’m just not anymore, because it was pretty good that I was afflicted, and I don’t know where I would be if I was able to keep going like I was going," he said.

Kilpatrick added that his marriage was already in trouble before he was arrested, charged, and convicted. Now, he's been able to see one of his twins get his master's degree and the other picking up his bachelor's degree.

"I needed all of that to sustain the strength and confidence to proclaim in the word of God. I don’t believe I would have the tenacity for all that I went through. So I know people a lot of people thought it was unfair, they pronounced a 28-year prison sentence on me. That was ridiculous. Well, I didn’t do it. Did I deserve it, I don’t know," he said.

Kilpatrick said that over the past 20 years, there is a hidden gem that come out of everything he's been through.

"I thought my purpose in life was to be the Mayor for the City of Detroit. From the age of 10 years old. That’s all I ever told people I wanted to be. I didn’t want to be President. I didn’t want to be Governor. I wanted to be like Coleman Young. I met Coleman at 10 years old and I thought that was my destiny in life. The hidden gem is that was never the place I was supposed to spend the rest of my life. And that’s what I want to tell Detroiters, I was never supposed to be there forever, I was supposed to do exactly what I’m doing now," Kilpatrick said. 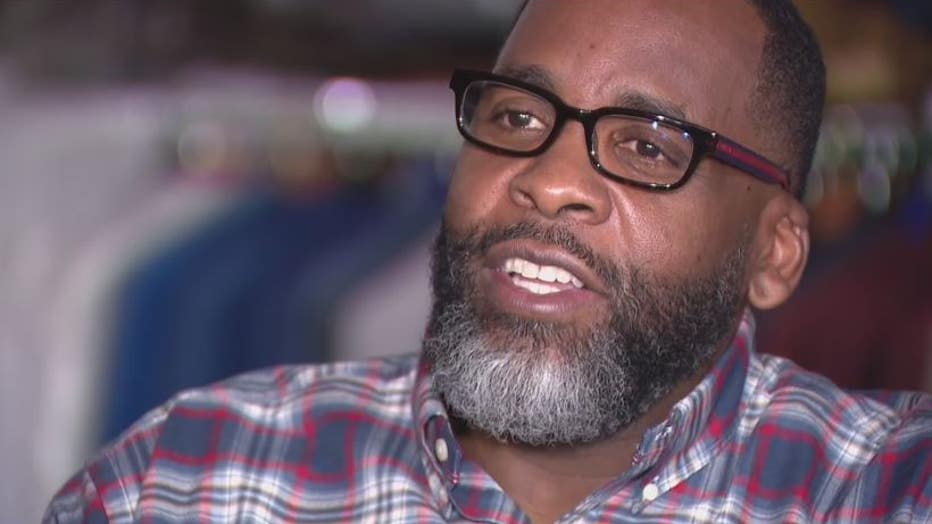 As Detroit evolves in this decade, Kilpatrick said there needs to be more focus on the people in the city.

"The issue is the involvement of the people who’ve been here. It’s not really who’s coming. It’s about the people who’s been here the whole time and wants to a part of the movement forward," he said. "The people on Carter, Joy Road, Puritan, Wyoming, Fenkell."

Don't worry, he included the east side as well - Gratiot, Cadieux, Van Dyke, and more.

Regardless of which side of the city, the city needs to balance things out for those who have stayed.

"But the people from those areas are so excited to see what’s happening in Detroit and they want to be a part of it and I think that’s the balance of growth," Kilpatrick said. "I see a lot of the things that Coleman Young, Dennis Archer, and Kwame Kilpatrick put in place in this town as far as a footprint and blueprint and foundation of development, it’s really manifested right now. Right here on on Livernois, this is an amazing outgrowth of conversations that were held in the office, what we should do and to see it now is absolutely dynamic."

For those who support and oppose him, Kilpatrick has a message for them, too. What's happening next is about more than the former mayor.

"I need people who love me to understand I’m alright. Thank you for your prayers because I’m alright. And those people with the vitriol, it’s not me that you’re mad at and what we have to figure out is how we heal the hearts of those people," he said. "This still cannot be about a mayor guy. It has to be about you now. How you move on now to where you truly should be. That’s how we moved forward."

"This is a long time coming, and it’s a miracle for me to be sitting here talking to you right now."

Kilpatrick is now living in Georgia as he prepares to launch his ministry.

The former mayor was kind enough to speak with us for about half an hour and the entire interview can be found below.