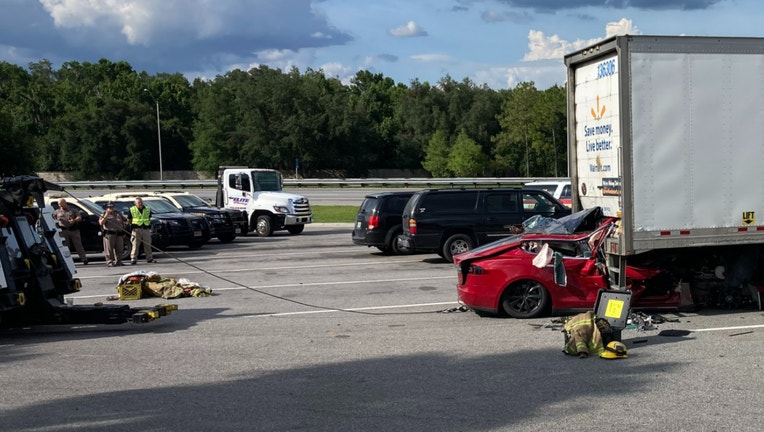 The Florida Highway Patrol investigates a crash near Gainesville in which two people died, on July 6, 2022.

LAKE MARY, Fla. - A driver and passenger traveling in a Tesla died after they crashed into the rear of a tractor-trailer that was parked at a rest stop along Interstate 75 in Florida, according to authorities.

The Florida Highway Patrol said the deadly crash happened just before 2 p.m. on Wednesday at the Paynes Prairie Rest Area just south of Gainesville. The deceased were not immediately named, but they are described as a 66-year-old woman, identified as the driver, and a 67-year-old man, who was a passenger.

Troopers said the Tesla was traveling southbound on I-75 before it exited.  For "unknown reasons," the 2015 Tesla struck a parked Walmart truck, where it came to final rest. Both of the occupants were pronounced dead at the scene. The driver of the truck was not injured, troopers said.

In September of last year, the FHP said a driver failed to control her Tesla when it crashed into the patrol car of a trooper who was responding to a crash on Interstate 4 in Orlando. The incident was captured on the patrol car's dashboard camera.